Cambodia gives glimpse of base at center of China rumors 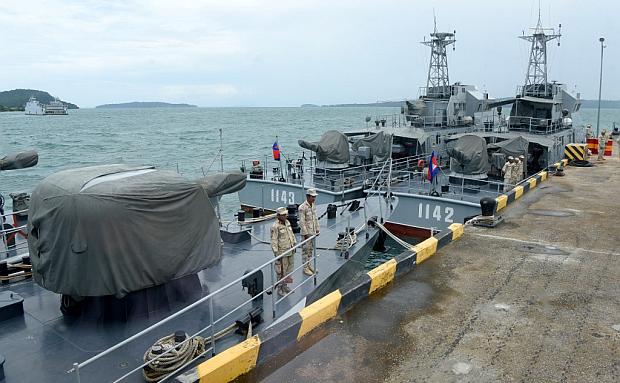 Cambodian naval personnel are seen on boats berthed at a jetty at the Ream naval base in Preah Sihanouk province on July 26, 2019 during a government organized media tour. Cambodia on July 25 rubbished reports of a deal allowing China to use a naval base as “ill-intended” and aimed at inciting unrest in a country whose public is increasingly uneasy about Beijing’s growing influence. (Photo by TANG CHHIN SOTHY / AFP)

REAM NAVAL BASE, Cambodia — Cambodia gave an unprecedented media tour of a strategically crucial naval base on Friday as authorities try to knock down a report of a secret deal allowing Chinese warships to dock at the facility.

The Ream naval base, near Sihanoukville, is on the Gulf of Thailand with easy access to the fiercely contested South China Sea.

The Wall Street Journal this week reported a deal had been struck allowing China to dock its warships and store weapons at the base, apparently confirming months of rumors.

The report has been strenuously denied by Cambodia, which fears stoking anti-Chinese sentiment among a public increasingly uneasy over Beijing’s growing influence.

Scores of reporters were taken from Phenom Penh to Ream on a brief government-steered tour on Friday.

They were driven in vans donated by the People’s Liberation Army of China — with thanks written in Khmer on the back windows of the vehicles.

Billboards on the approach to the base in Chinese and Khmer advertised soon-to-be-erected restaurants and hotels.

After the whistlestop tour of the Ream base, a defense ministry spokesman told reporters the kingdom had “nothing to hide.”

“See there is nothing about the reported Chinese military base,” Chhum Socheat added.

Reporters, closely chaperoned by navy and government officers, were shown a number of outhouses and a jetty where several Cambodian-flagged patrol ships had docked.

It was unclear where the blue-grey boats, armed with canons, had come from — although China has donated several warships over recent years.

“You [journalists] from national and international media are our eyes and noses… we have nothing to hide from foreigners who still accuse us of doing this or that,” Chhum Socheat said, adding satellite imagery would quickly prove if Chinese ships had used the base.

But Chinese influence inside the kingdom has burgeoned in recent years with the building of casinos, condos, and roads as well as the granting of billions of dollars of soft loans to the government.

Prime Minister Hun Sen, in power for more than three decades, has edged away from the previously strong relationship with the US, rejecting criticism of his increasingly authoritarian rule.

But analysts say Hun Sen is deeply attuned to the potential for an anti-China backlash from the public, especially in Sihanoukville where many businesses are Chinese-owned.

The US embassy in Phnom Penh has said Cambodia suddenly withdrew a request for help to upgrade the Ream base.

“This causes us to wonder if the Cambodian leadership’s plans for Ream Naval Base include the possible hosting of foreign military assets and personnel on Cambodian soil,” an embassy official told AFP on Thursday, requesting anonymity.

Government spokesman Phay Siphan said Cambodia had not asked for US help to renovate Ream.

“Our Ministry of Defence has never made that request,” he said, adding the press tour “has killed… the fake news” about a deal with China to use the naval base.