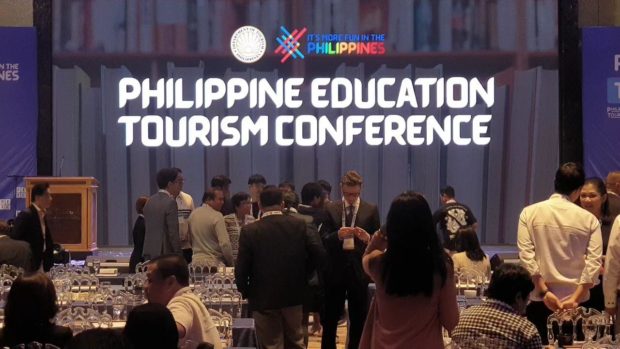 CEBU CITY—The government is expanding “education tourism” to lure students from the Middle East and Europe to come to the Philippines and study.

Tourism Undersecretary Benito Bengzon, during the Philippine Education Tourism Conference in Lapu-Lapu City on Monday (July 29), said the Department of Tourism (DOT) is marketing the Philippines as a destination for learners, especially those who would want to study English.

Bengzon said tourism officials took notice of education tourism when, in 2010, they saw a sharp increase in the number of foreign students in the Philippines as a result of that year’s tourism plan.

Bengzon said more students could come from countries other than Korea, China, Japan, Taiwan, Thailand and Malaysia which are now the main sources of educational tourists.

The number of foreign students in the Philippines could be higher, according to Bengzon, as not all foreigners studying in the country have student permits.

The DOT, he said, is now making an inventory of foreign students in the Philippines including those who are in the country for shorter periods.

Eli Natividad, president of English as Second Language (ESL) teachers in the Philippines, said at least 7,000 ESL learners per month come to Baguio City alone and do not apply for student permits and come in as tourists.

Shaimar Tamano, DOT Central Visayas director, said there are at least 165 ESL schools in the region alone, mostly based in Cebu province.

He said educational tourists tend to spend more because they tend to stay longer.

The DOT director said there is an influx of foreign students who are also in Cebu to finish their tertiary education. They come from India, Nigeria, Thailand, US, Korea, New Guinea, and Kenya.

Tamano said most tourists who go island-hopping in Cebu are foreign students “who travel during weekends when they don’t have classes.”

The DOT is also coming up with a system allowing schools to also offer regular tour packages for their students./TSB