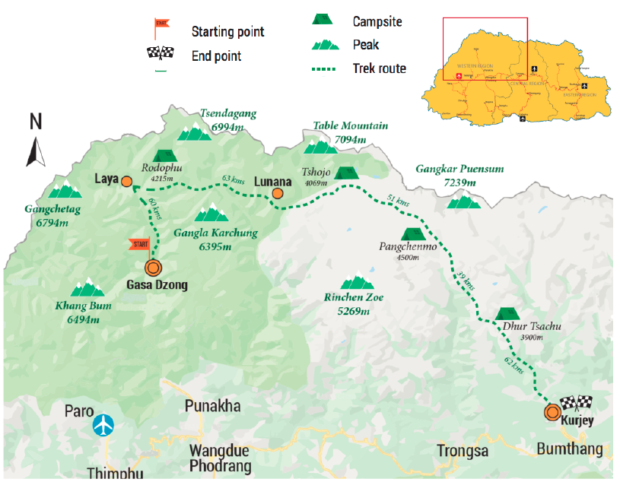 THIMPHU — The countdown has begun. 14 months and 13 days from today, Bhutan will host the world’s toughest ultra-marathon, the Snowman Run, coinciding with the Royal Wedding Anniversary on October 13.

Somewhere between myth and magnificence, the alpine quest will take elite runners from across the world through the pristine yet unforgiving landscapes above the treeline.

The run will start from Gasa and conclude in the valley of Bumthang; in the process runners will cover over 300km in less than five days following the trail of the famous Snowman Trek, believed to be once walked by the abominable snowman (yeti).

The snowman trek has been completed by fewer people than Everest. It is a trail that connects villages in the highland and the country to its eastern, western and central regions.

However, more than the scenic and physically draining experience the run has to offer, it is a call made by the tiny Himalayan country to convey a larger message on climate change.

The initiative emanates from His Majesty The King’s multiple visits to the highlands to witness the impacts of climate change in the community.

The entire race through which the Snowman Run takes place, offers a perfect view of the effects of climate change, which are evident here in the receding glaciers.

With a net carbon sink, Bhutan is dubbed as a carbon negative country in the world. However, the glaciers, which feed its rivers, irrigate agricultural lands of over 60 percent of farmers in Bhutan and powers its hydropower plants, are melting, rapidly.

Glacial lakes are at a risk of breaching their ice-and-rock moraine walls, flooding the valleys below, and then disappearing. This beautiful and fragile land perfectly shows the far-reaching and irreversible impacts of climate change, and is a stark reminder of all that needs to be done to combat it.

At a reception hosted earlier this week, the chairperson of the Snowman Run Board, Cabinet Secretary Kesang Wangdi, said that the run was envisioned by His Majesty The King. He said the run will showcase Bhutan and the leadership the successive Kings provided in the country’s conservation efforts.

WWF’s country representative, Dechen Dorji, who is one of the board members said that the run is an activity used to convey a larger message; a message of urgency for the world and humanity to come together to battle climate change.

Besides challenging the athletes physically, the run calls for the world leaders and global community to take bold and transformative actions that will avert the greatest crisis humanity has ever faced, he said.

Dechen Dorji said that the run is a symbolic representation of how a small country like Bhutan with its great leadership of the Kings who are the champions of the environment can contribute to addressing climate change. “His Majesty has walked the length and breadth in the highland communities talking to villagers on climate change and its impact.”

He said that the run is planned for 2020, the year the United Nations commemorates 75 years of its founding. The five-year review of the Sustainable Development Goals (SDG) and the reviewing of the conventions on biodiversity by the global community would also take place next year.

“WWF is calling 2020 as a super policy year for environment and climate change,” he said adding that the world will come together to sign a new deal for people and the nature. “People will continue to have developments but not at the cost of the environment. We will find different technologies and innovations to develop sustainably.”

Meanwhile, as part of the program a website www.snowmanrun.org was also launched in Thimphu on July 22. The Snowman Run Secretariat is currently inviting entries for design of a logo for the Snowman Run. A prize will be awarded to the final selected logo.