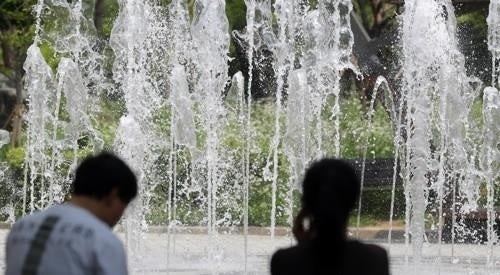 SEOUL — A scorching heat wave began to grip South Korea on Monday after the monsoon season ended, with heat wave advisories issued for most of the country.

With Korea falling under the influence of high pressure in the North Pacific Ocean, the daily high temperature was expected to be 30 degrees Celsius in Seoul and to soar to 34 C in Gangneung, Gangwon Province; along the east coast in Pohang, North Gyeongsang Province; and inlands areas in Daegu and Chungcheong Province, according to the Korea Meteorological Administration.

As of 11 a.m., a heat wave advisory was issued for Seoul, Busan, parts of all the provinces as well as Jeju Island.

Heat wave warnings are also in effect in Daejeon, Gwangju, Daegu and Sejong.

The heat wave alert could be expanded to other regions, according to the weather agency.