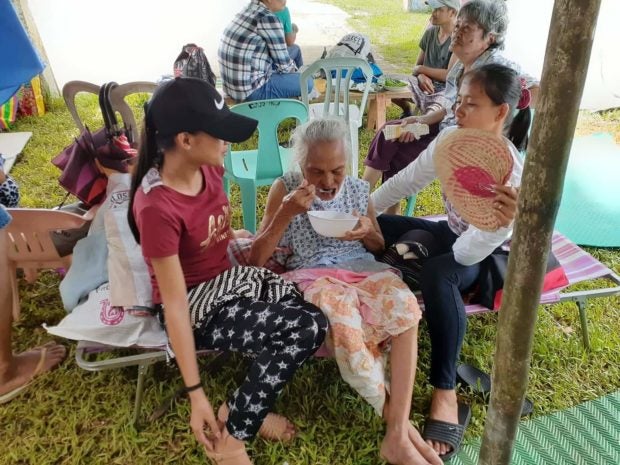 ITBAYAT, Batanes, Philippines — When the first jolt woke up Telesforo Valiente, 68, at 4:16 a.m. on Saturday, he rushed out to fetch his mother, Rosario, also known in this community as Lola Yayo, who at 101 is the oldest resident of this town on the island of the same name.

Lola Yayo lives in a stone house, so Valiente took her to his house, which is made of reinforced concrete.

At 7:37 a.m., a second and much stronger quake tore down Lola Yayo’s home. Asked if she had experienced strong quakes before, Lola Yayo said, “Ara pali” (Never in my life).

Officials in Itbayat told President Rodrigo Duterte, who visited on Sunday, that the town lost eight lives and suffered P79.5 million in damage to infrastructure, some of them traditional Ivatan limestone houses.

Another casualty was identified as Edwin Ponce, but he has not been found.

Apart from Caan, who has been identified as the grandmother of Naquita, it was unclear as of this reporting how the other fatalities were related.

The President flew to Itbayat to assess the situation there. The town bore the brunt of the first quake that struck Batanes at 4:16 a.m. with a 5.4 magnitude.

As many as 194 quakes of varying magnitude rocked the town and other parts of Batanes on Saturday, according to Renato Solidum, chief of the Philippine Institute of Volcanology and Seismology (Phivolcs).

The President inspected the damage in Itbayat before presiding over a briefing in the provincial capital of Basco on the island of Batan south of Itbayat.

He committed an initial P40 million to rescue and rehabilitation efforts in the province.

“It’s about time that we do our part. We are the generation that, given a chance to be life-changing, [can change] things there. I can give you the P40 million,” he said.

In Manila, Cabinet Secretary Karlo Nograles issued a statement saying, “The government’s priority now is to ensure that those injured in the earthquake, as well as the families displaced by it, are given adequate medical care.”

Nograles added, “We will attend to the victims of this earthquake, and our provincial health office and the three Department of Health hospitals in Region 2 are ready to assist our countrymen in Batanes.” 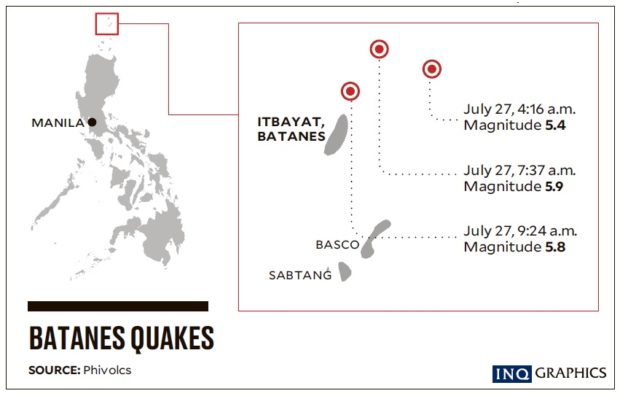 Another statement, this time from Quezon City Rep. Alfred Vargas, cited, in connection with Saturday’s quakes in Batanes, the West Valley Fault crossing certain cities in Metro Manila and the surrounding provinces.

“[A] few years back, the [Phivolcs] … warned [of] a powerful quake, possibly [in] the magnitude of 7.2 to be generated by the West Valley Fault, which is ripe for movement,” Vargas said. “It’s a huge undertaking and we have to start the real preparations now, before it’s too late,” he said as he called for the passage of a law creating a Department of Disaster Resilience.

Similar measures have been filed in the House of Representatives proposing such a department, which President Duterte cited as a legislative priority in his State of the Nation address last Monday.

Many Itbayat residents have yet to come to terms with the impact of the quakes.

“We have lived and survived typhoons for decades and we never had casualties. One jolt on Saturday, and we instantly had fatalities and houses crumbled,” said Edita de Guzman, a teacher of Itbayat Central School.

An article by retired seismologist Rolando Valenzuela published in the Inquirer on Jan. 4, 2014, pointed out that homes in Batanes were “designed and constructed … [to] withstand winds blowing at least 250 kilometers per hour.”

“Houses, particularly the old ones, constructed with cobbles and mortar, have walls as thick as 80 centimeters to 1 meter,” Valenzuela wrote, adding that Batanes “could very well be a model community for tropical cyclone mitigation and preparedness.”

In a press conference at Camp Aguinaldo on Sunday, Casiano Monilla, Office of Civil Defense deputy administrator for operations, also pointed out that “[t]he houses and even the church [in Batanes] are made of limestone with no steel frames because they are more resilient to storms because they have been there for a long time.”

“We may see the 5.9 earthquake as a low magnitude but it was really devastating for our countrymen there,” Monilla also said. —With reports from Jeannette I. Andrade, Julie M. Aurelio, Jhesset O. Enano and DJ Yap