Catamco met with PDEA Region 12 officials Thursday, July 25, and briefed her about the anti-narcotics efforts in the province.

In their meeting, PDEA Region 12 Director Naravy Duquiatan told Catamco that Cotabato province has the most number of users of illicit drugs throughout the region. 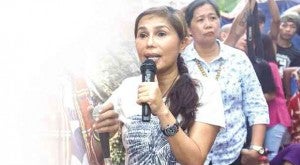 Region 12, also referred to as Soccsksargen region, is composed of Cotabato, South Cotabato, Sultan Kudarat, and Sarangani provinces, and the highly urbanized city of General Santos.

Duquiatan said the data has been verified and validated repeatedly since 2017, although she stopped short of providing numbers.

She added that the province has the most illegal drugs seized throughout the region.

“We should be hostile against them,” Catamco vowed.

She directed intensified security operations in the province’s borders with Maguindanao, Bukidnon and Davao del Sur “to preempt all illegal activities, especially those involving prohibited drugs.”

She also called for the re-activation of the Provincial Anti-Drug Abuse Council to consolidate actions to deal with the situation.