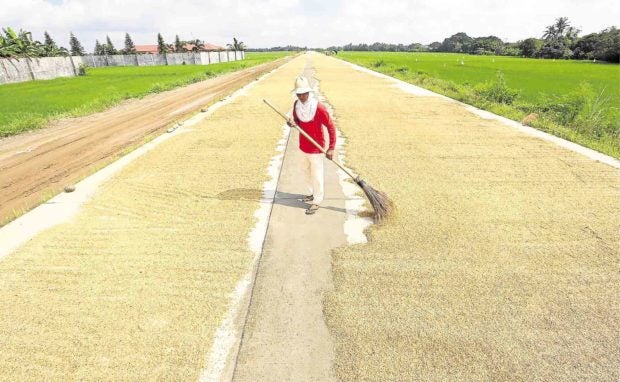 SUSPEND RICE IMPORTS To help local rice farmers boost their incomes, President Duterte says he will suspend rice imports during the harvest seasons and the government has to buy their produce. But Raul Montemayor of the Federation of Free Farmers says that cannot be done under the Rice Tariffication Act unless it is amended. —NIÑO JESUS ORBETA

President Duterte said suspending the importation of rice during the harvest seasons would be a “happy compromise” between helping boost farmers’ income and making sure the staple would be available year-round.

It was unclear, however, how the government could hold back imports under the rice tariffication law that Mr. Duterte recently signed to impose tariffs on imported rice in lieu of volume restrictions.

Speaking at the inauguration of a bypass road in Candon City, Ilocos Sur province, on Thursday, Mr. Duterte said the priority should be given to purchasing local rice, even if it would mean possible financial losses for the government.

“I can assure you, I will create a happy compromise between the farmers and the importation. You can be sure that during your harvest, no importation will be allowed. I don’t want it,” the President said.

He said he wanted to protect local farmers during the harvest seasons from competition from imported rice.

“Buy all the stocks, even if it’s expensive, before importing,” Mr. Duterte said. If that is not done, the farmers around the country “will feel bad,” he added.

The country has two harvest seasons for irrigated rice farms—from December to January and from March to April. Of the 3.9 million hectares of rice nationwide, however, only 1.2 million ha, or 31 percent, are irrigated.

Amid the soaring prices of rice that jacked up the inflation rate last year, the President pushed for the liberalization of rice importation to fulfill the country’s commitments to the World Trade Organization (WTO). In February, he signed Republic Act No. 11203, or the Rice Tariffication Act, which liberalized rice importation.

After several months, rice prices helped temper inflation, which fell to a 22-year low of 2.7 percent year-on-year in June.

Rosendo So, chair of the farmers’ group Samahang Industriya ng Agrikultura (Sinag), said they had long demanded the suspension of rice imports.

“We laud the efforts of the President because that has been our request for the longest time, even [for] other agricultural commodities that are suffering from gluts because of the influx of imports,” So told the Inquirer.

Raul Montemayor, national business manager of the Federation of Free Farmers, said the President could not enforce the suspension of imports under the rice tariffication law because that would violate the government’s commitments to liberalize rice trading under the WTO.

“He (the President) does not understand the law that he signed,” Montemayor told the Inquirer. “There is nothing there [in the law that allows it]. Under WTO rules you cannot [stop importation] since the purpose of rice tariffication was to revoke the QR (quantitative restrictions). He cannot reimpose the QR.”

Montemayor said, however, that the law could be amended to allow QR under certain circumstances, which his group had recommended but lawmakers had rejected.

In his fourth State of the Nation address, the President promised to ensure the full implementation of the law, including the creation of the mandated annual P10-billion Rice Competitiveness Enhancement Fund.

“This will safeguard the livelihood of small farmers through the provisions of modern farm equipment and machinery, seeds and credit, and extension services. We shall continue to invest in the countryside through agricultural programs that will increase the productivity and income of our small farmers and fisherfolk,” Mr. Duterte said.

Recently, farmers’ groups complained about the decline of palay prices, which were supposedly triggered by the new rice tariffication law.

The Philippine Statistics Authority reported the average farm gate price of palay had dropped to P17.85 per kilogram as of the first week of July, down 17.3 percent from year-ago prices.

According to Sinag, farmers, especially from Nueva Ecija and Isabela provinces, have complained that prices have dropped to P13 a kilo. The group said current rates were barely enough to cover production cost, currently at P12 a kilo.

In his speech in Candon on Thursday, the President said it would be better for the government to spend money on local produce than to see farmers joining the communist rebels.

“If they join the New People’s Army, we will be saddled with bigger expenses. Life and bullets. It’s common sense. Buy rice, even if we end up losing,” he said.