Customs seizes P5.5-M worth of illegal drugs, marijuana at Naia 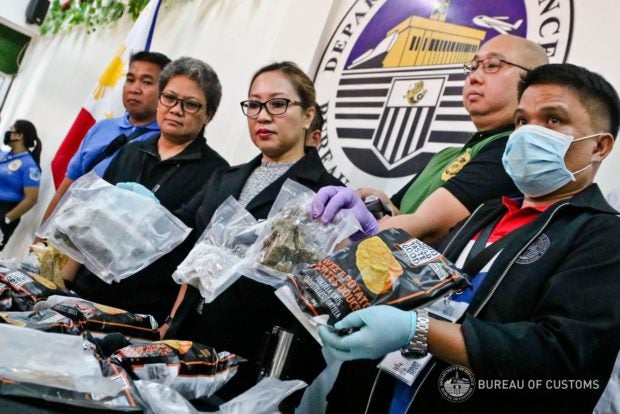 Agents of the  Bureau of Customs-Ninoy Aquino International Airport (BOC-Naia) and the Philippine Drug Enforcement Agency seized some P5.5-million worth of ecstasy, valium and marijuana. Image: Facebook/Bureau of Customs.

MANILA, Philippines — Some P5.5-million worth of illegal drugs and marijuana were seized at the Ninoy Aquino International Airport (Naia), the Bureau of Customs (BOC) said on Friday.

In a statement, alert examiners and operatives of the BOC-Naia and the Philippine Drug Enforcement Agency (PDEA) confiscated a total of 1,490 tablets of ecstasy, 3,320 tablets of valium and 1,850 grams of “Kush” weeds or marijuana.

The two parcels were bound to receive by two unidentified consignees, who hailed from Cavite and San Juan City, respectively.

The owner of the marijuana, who was also unidentified in the report, was previously apprehended and is now under the custody of PDEA.

The valium tablets were bound for export for 36 consignees of eight countries (US, Australia, United Arab Emirates, Germany, Saudi Arabia, France, Sweden, Spain and the UK) and sent by four different shippers from Parañaque City and Bulacan.

BOC Naia District Collector Mimel Talusan then reminded the public that importation or exportation of illegal drugs is prohibited under Republic Act 9165 or “The Comprehensive Dangerous Drugs Act of 2002,” in relation to Republic Act 10863 or “The Customs Modernization Tariff Act.”

“BOC Naia is committed to be always vigilant in protecting the borders from the entry and exit of illicit goods,” Talusan said in a statement. /jpv