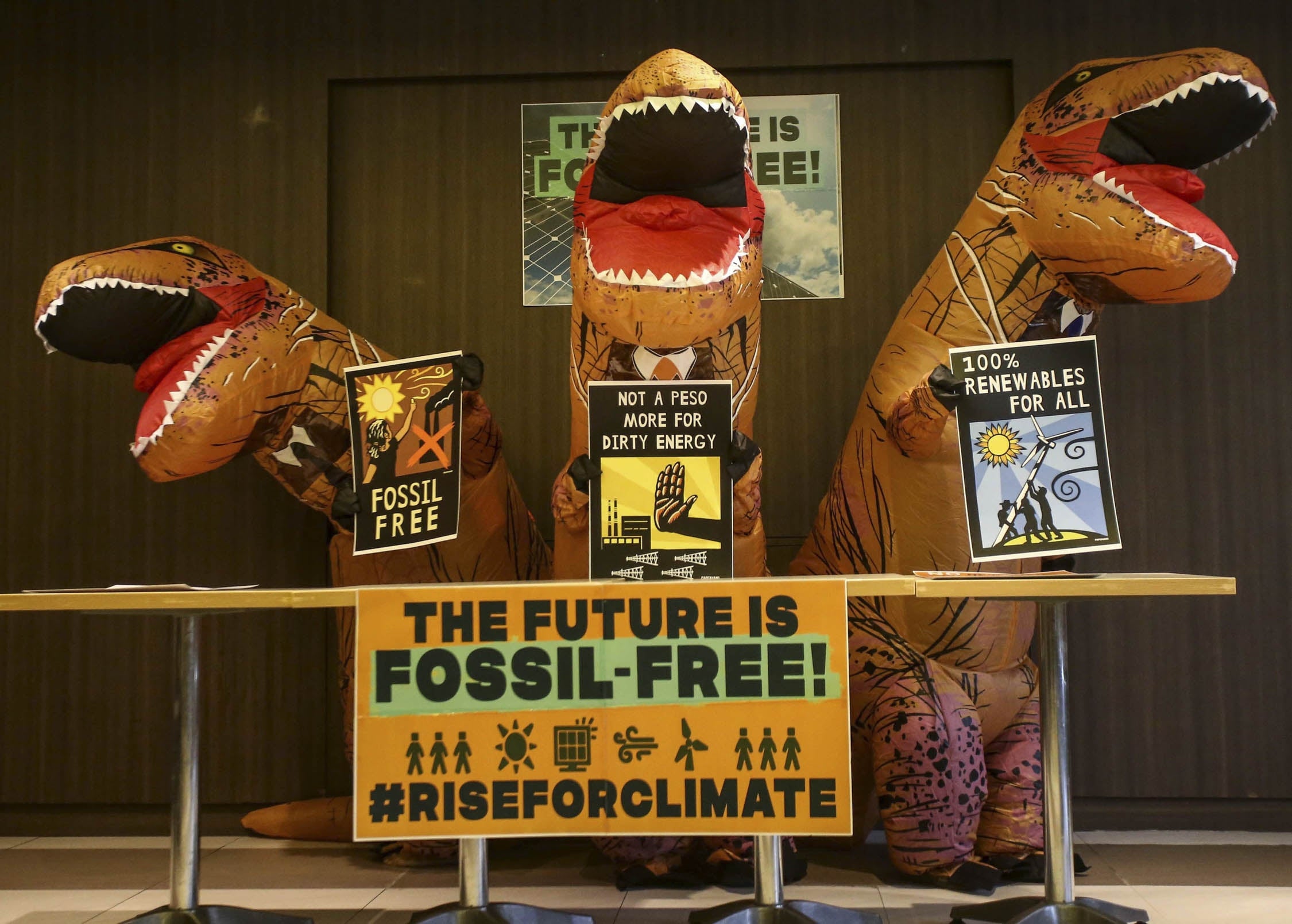 SHOW OF FANGS VS FOSSIL FUELS In a 2018 protest action, environmentalists in T-Rex costumes challenge the country’s three biggest coal companies to lead the Philippine transition to renewable and clean energy sources like wind and solar. Coal, a fossil fuel, is a major contributor to global warming. —JAM STA. ROSA

An energy and environment think tank has called on the Duterte administration to issue an executive order to fast-track the development of renewable energy sources while reducing dependence on coal.

The Center for Energy, Ecology and Development (CEED) made the appeal after President Duterte directed Energy Secretary Alfonso Cusi in his State of the Nation address on Monday to speed up the development of renewable energy sources and reduce dependence on traditional energy sources such as coal.

Environment groups said the President’s statement should be the signal for government officials to speed up the transition to cleaner energy alternatives, including solar and wind.

“We also encourage Energy Secretary Alfonso Cusi and Environment Secretary Roy Cimatu to outline what it means for its standing policies on permitting processes concerning energy projects and coal-fired power plants in the pipeline,” Arances said in a statement.

“We do not want the offices mainly mandated to pursue this transition to be the ones contradicting the President’s commitment to the people.”

Both agencies drew flak from green groups after the DENR recently issued an environmental compliance certificate to a 15-megawatt coal-fired power plant in Palawan province.

The plant would adversely impact the public health and biodiversity in the province, dubbed the country’s last ecological frontier, according to anticoal advocates and residents.

Coal, a fossil fuel that emits greenhouse gases, still dominates the country’s current energy mix. It is seen as a major contributor to global warming.

The share of coal was expected to grow with 30 coal projects in the pipeline, Arances said, even as anticoal groups warned that coal-fired power plants were increasingly becoming stranding assets.

The Philippine Energy Plan, formulated by the DOE, also projects increasing coal use for at least two more decades.

Its growth continues even after the passage in 2008 of the Renewable Energy Act, which pushes for a transition away from fossil fuels.

“Renewable energy can provide a major share of the Philippine electricity mix in a stable and reliable manner, and at the same time, increase energy self-sufficiency and reduce supply-related risks,” said CCC Secretary Emmanuel de Guzman.

“We must act swiftly to transform our energy sector and to deliver its socioeconomic benefits to the Filipino people,” he added. —JHESSET O. ENANO