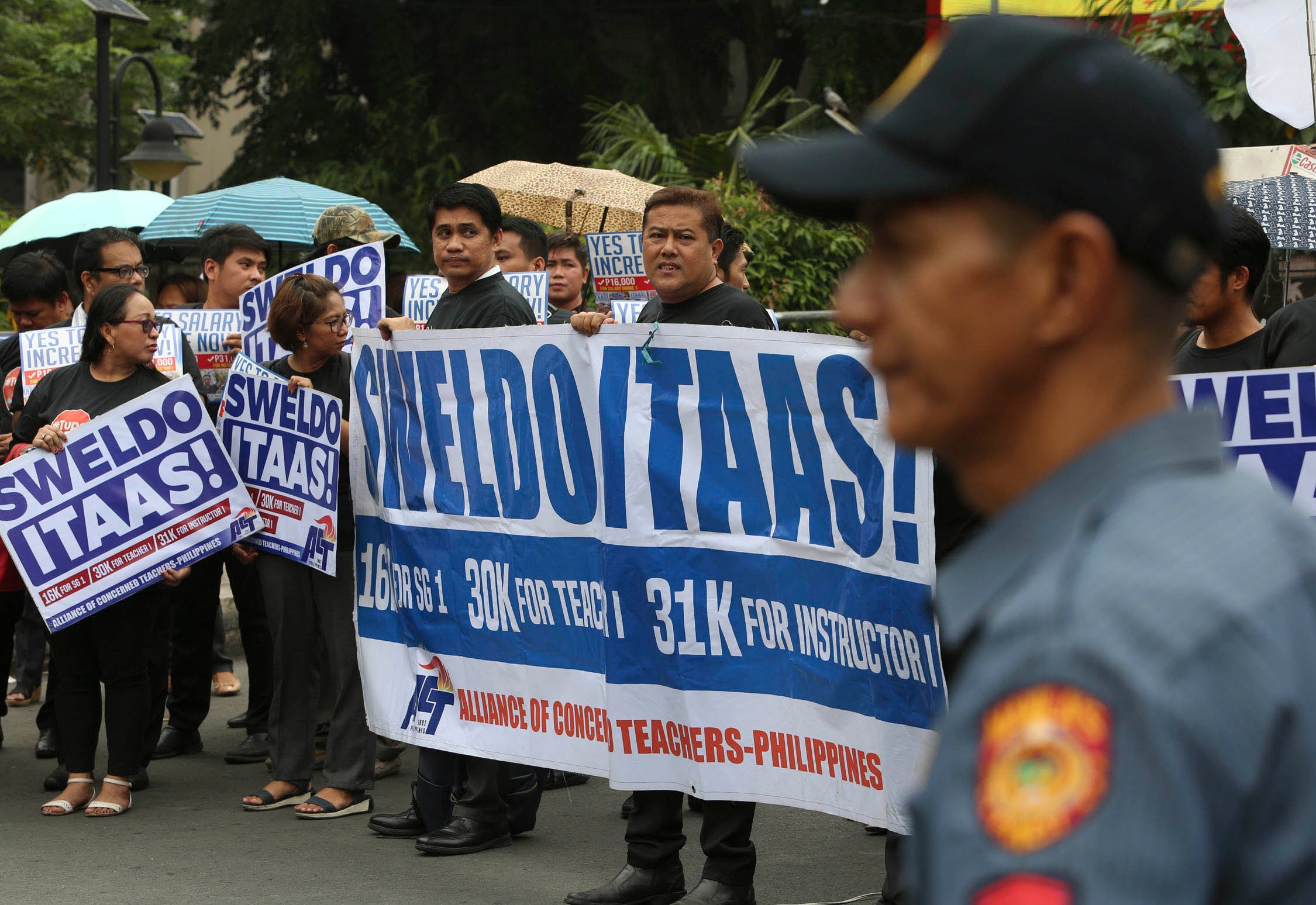 PAY INCREASE Members of Alliance for Concerned Teachers stage a rally on Chino Roces (formerly Mendiola) Bridge in Manila, days before President Duterte delivered his fourth State of the Nation address, to press for a salary increase for public school teachers. —MARIANNE BERMUDEZ

If the government is sincere in its pledge to improve the lives of state workers, it must change the system in which high-ranking officials are the biggest beneficiaries of salary increases, a party-list lawmaker said on Thursday.

Bayan Muna  Rep. Ferdinand Gaite said his group welcomed moves to give priority to measures meant to increase the salaries of government employees.

“We are wary, however, that like previous adjustments under the Salary Standardization Law (SSL), top officials and executives received tremendous hikes in their salaries, while ordinary, rank-and-file employees obtained orts,” Gaite said. “This must change.”

His statement comes in the wake of Malacañang’s pronouncements to raise the salaries of government workers through a fifth amendment to the SSL, or Republic Act No. 6758.

Presidential spokesperson Salvador Panelo on Thursday reassured public school teachers that President Duterte had not forgotten his promise to double their salaries, saying the Chief Executive “loves” teachers too much to forget them.

Mr. Duterte directed Congress in his fourth State of the Nation address on Monday to approve a new SSL so that civil servants like teachers and nurses could get pay increases.

Last year, he told his Cabinet to look for ways to double teachers’ pay after policemen and soldiers received salary increases.

But Gaite, a former national president of the Confederation for Unity Recognition and Advancement of Government Employees, is doubtful that a new SSL version will have considerable impact on the lives of state workers.

“This is disappointing because it is self-serving, as it would seem that our officials are aggressive to push for these salary increases where they are the biggest beneficiaries,” he said in an interview.

He cited the case of government workers receiving the lowest salary grade were now receiving a little more than P11,000 after four SSL amendments, or a mere increase of 20 percent from their monthly pay of P9,000.

“The public sector has been clamoring for action on this demand from the Duterte administration for the past several years,” he said.

He, however, expressed dismay over reports that Malacañang was set to adopt a version filed by a senator that would give workers a “dismal” P500 increase.

Salary increases for the President, Vice President, senators and congressmen are not covered under the measure.

Aside from a salary increase, the party-list group Bayan Muna is pushing for an across-the-board minimum pay of P16,000 for government employees.

“A uniform minimum wage will correct the varying minimum wages for employees in national government agencies, local government units, government-owned and/or -controlled corporations and others,” Gaite said in a statement. —WITH A REPORT FROM JULIE M. AURELIO