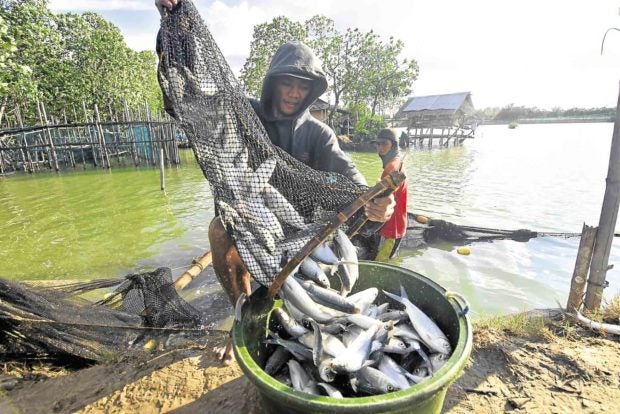 SUAL, PANGASINAN—At least 34 fish pens have already been dismantled while some 100 more will be demolished as local fishery officials continue to counter aquatic pollution in the Kakiputan Channel in western Pangasinan.

Officials of the Bureau of Fisheries and Aquatic Resources (BFAR) in Ilocos region on Monday met with town officials of Anda and Bolinao to assess the ongoing dismantling operations of fish pens that the agency recommended in 2017.

The pens in Pangasinan’s aquaculture zone had been largely blamed for massive fishkills that hit several coastal villages.

Close to 500 “bangus” (milkfish) pens and 266 cages operate in Anda alone. Most of these are located in the waters off the villages of Mal-ong, Awag, Siapar, Dolaoan and San Jose.

On May 31 last year, dead fish worth P86 million were found floating along the Kakiputan Channel.

From pens to cages

The shift from pens to cages was recommended by the BFAR to address the deteriorating water quality in the aquaculture zone.

Fish farm pollution has impeded the flow of water from and to the sea. The Kakiputan Channel, BFAR officials said, needs immediate rehabilitation.

The pens and cages in Anda and Bolinao are the sources of at least 60 percent of bangus being produced in Pangasinan.

Lilibeth Signey, BFAR regional director, said 61 fishery operators had already applied for a P1-million bank loan each for the construction of cages and for inputs.

Signey said a modified cage had been developed for shallow waters and can be used by pen owners who wanted to shift to cage structures.

According to officials of the two towns, fish pen operators had been notified last year to dismantle their structures. They said demolition was suspended because of May’s midterm elections.

In Anda, Municipal Agriculturist Elizabeth Tomas said clearing operations began in May after the last batch of the notices of violation was issued by then Mayor Aldrin Celdran.

Those who applied for cage permits dismantled their pens, Tomas said. She said 134 pens had no more stocks and were scheduled for demolition.

She said the fish pen operators were given until December to dismantle their structures.

In Bolinao, Lina Ramirez, an agricultural consultant of the municipal government, said a proposed ordinance had been drafted to amend the ordinance that allows fish pen operations in the town.

The measure will limit the number of fishery structures to the carrying capacity of the water. Aquaculture operators will also be required to obtain an environmental compliance certificate from the Environmental Management Bureau.

About 300 fish cages and 91 pens are still found in Bolinao. —YOLANDA SOTELO