MANILA, Philippines – Manila Mayor Isko Moreno announced on Thursday that he would soon prohibit the use of e-tricycles as a public utility vehicle in the city for supposedly creating road chaos.

Moreno said that around 300 e-tricycles would be affected.

Moreno said that while the government is studying the ban of e-tricycle around Metro Manila, he said it would be prohibited in the capital city.

“We will pull it out because it generates chaos,” Moreno told reporters.

According to the Metropolitan Manila Development Authority (MMDA), e-tricycles plying around the Metro were classified as “toys” given that these are not motorized vehicles.

Moreno then chided the Department of Transportation (DOTr) for allowing these electronic tricycles to hit the streets. 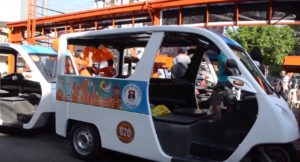 With this, Moreno suggested the DOTr to immediately note during the manufacturing stage of these electronic tricycles that these were not for public use.

“If we are into this, dapat sa planta pa lang, ang category nitong mga ito ay for personal use,” he added.

Moreno also noted that compared to jeepneys and other utility vehicles, e-tricycles could not be regulated by the transportation board because these are not motorized vehicles.

Electric tricycles were one of the programs implemented by former Manila Mayor Joseph Ejercito Estrada.

Aside from being a public utility vehicle, the tricycles were also used in tours in the city’s historic sites like Intramuros./gsg