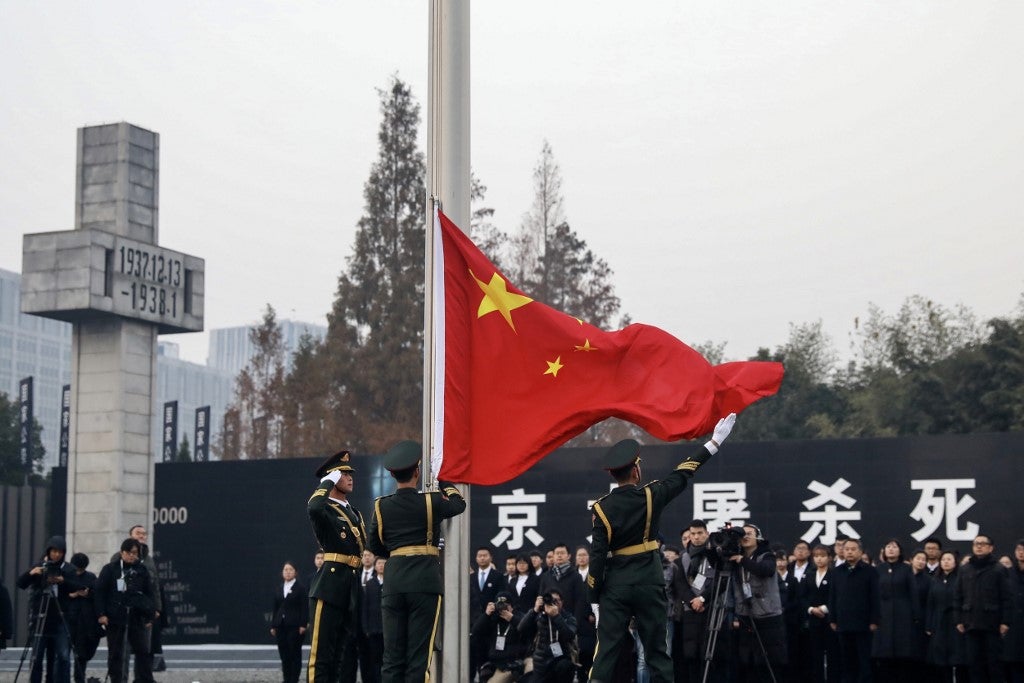 People’s Liberation Army (PLA) soldiers raise the Chinese flag during a memorial ceremony at the Nanjing Massacre Memorial Hall on the annual national day of remembrance to commemorate the 81st anniversary of the massacre in Nanjing in China’s eastern Jiangsu province on December 13, 2018. (Photo by STR / AFP)

“International strategic competition is on the rise,” the document says, adding that the United States has adjusted its national security and defense strategies and adopted “unilateral policies”.

The US “has provoked and intensified competition among major countries, significantly increased its defense expenditure, pushed for additional capacity in nuclear, outer space, cyber and missile defense, and undermined global strategic stability”.

War is evolving towards “intelligent warfare”, the national security plan says, citing a growing use of AI, big data, cloud computing and “new and high-tech military technologies based on IT”.

China’s defense spending is second only to the United States, and it said earlier this year it planned to increase it by 7.5 percent in 2019.

Despite the ambitious plans, it insists the Chinese army is a “staunch force for world peace”.

But within its own borders it is less sanguine, promising to “crack down” on separatists in Xinjiang and Tibet.

Beijing is firmer still on the self-ruled island of Taiwan — which China views as its own territory — and makes “no promise to renounce the use of force” in bringing it back into the fold.

“China must be and will be reunited,” the paper reads. “China has the firm resolve and the ability to safeguard national sovereignty… and will never allow the secession of any part of its territory by anyone.”

It says Taiwan “separatists” are the biggest threat to the peaceful reunification of the country.

“The PLA will resolutely defeat anyone attempting to separate Taiwan from China,” it says.

The PLA has been focused on catching up with technology used by armed forces in the US and western Europe, and is reportedly building a third aircraft carrier as well as developing new generation destroyer vessels, fighter jets and ballistic missiles.