400 kms of roads wrecked by flood in Bangladesh 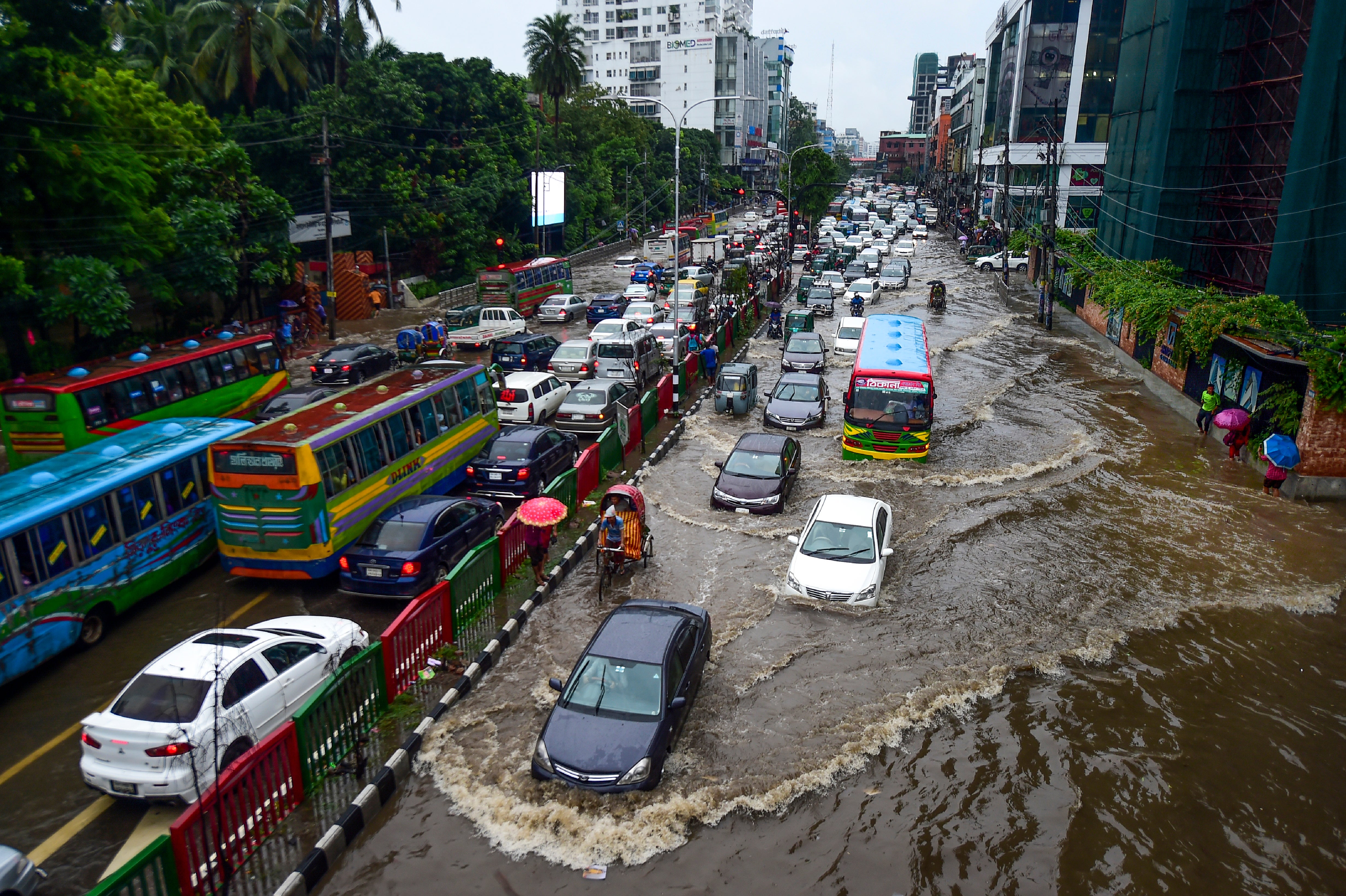 (FILES) In this file photo taken on July 12, 2019, Bangladeshi drivers make their way through heavy rainfall at a water-logged street during the monsoon season in Dhaka. AFP FILE PHOTO

DHAKA — Around 400kms of roads and highways under the Roads and Highways Department have been damaged by the floods across Bangladesh.

Many of them are still under water and local offices are yet to estimate the repair cost as of yesterday, according to the central control room at the RHD headquarters in the capital.

Of the RHD’s 65 road divisions, 11 are affected. The condition of roads in Gaibandha, Kurigram, Rangpur and Netrakona is the worst and national and regional highways and districts roads are the ones affected, said Munir Hossain, executive engineer working at the control room.

However, the Department of Disaster Management says the length of damaged roads and highways is much higher.

Flood water destroyed around 171.78kms of roads and damaged about 3,303.25km in 14 districts until Thursday, according to the department. It will be much higher as 27 districts have so far been affected by floods.

There are 21,576kms of national and regional highways and district roads in the country. But roads at upazila-and union-level are under the jurisdiction of the Local Government Engineering Department.

Damaged roads and highways may create problems for Eid holidaymakers unless those can be made “usable” before Eid, expected to be celebrated in the second week of next month.

Talking to The Daily Star yesterday, four executive and sub-divisional engineers said they hoped that national and regional highways would be “usable” before Eid if the flood situation did not worsen.

It would take two or three months to make all the roads and highways as they were before, they said.

He, however, claimed that “every highway is in a good shape now” and it would be the same in the coming days.

“Condition of highways is better than any other time and we hope there will be no congestion due to road condition,” he told reporters at his ministry office.

According to the RHD’s control room, of the 396.14km affected roads, 122.48km, which is the highest, was damaged in Gaibandha division, while 102.40km was affected in Kurigram division, 69.50km in Rangpur division, and 61.50km in Netra-kona division.

The length of damaged roads may increase when reports are updated, said Munir Hossain.

Amir Hossain, executive engineer of Kurigram, said 83km, of the 102.40km affect-ed roads, under his division was damaged by floods and the rest by insistent rain.

Four and a half kilometres of Kurigram-Nageshwari-Sonahat Land Port National Highway were damaged by floods, while 24kms of a regional highway were also affected, he said, adding that the portion of the national highway had already been made “usable”.

“We will require Tk 21 crore to repair all the roads. We hope to make the roads ‘usable’ before Eid, but it will take around two months to make them as they were before,” he said.

AKM Shafiquzzaman, executive engineer of Rangpur division, said as per the up-date he got, 79.50kms of roads, including some portions of Rangpur-Kurigram Na-tional Highway, were damaged.

Quader said like previous years, heavy vehicles, including trucks and lorries, would not operate on highways across the country three days ahead of Eid.

However, vehicles carrying daily essentials and emergency medicine will be out-side the purview of the ban, he said.

Besides, steps will be taken to ensure that the CNG filling stations across the country remain open round the clock seven days before and three days after Eid, he added.

The ministry will also write to garment factory owners to give their workers leave on different dates, he said.

Quader added that they instructed the authorities concerned not to allow any cattle markets beside highways to avoid traffic jams.