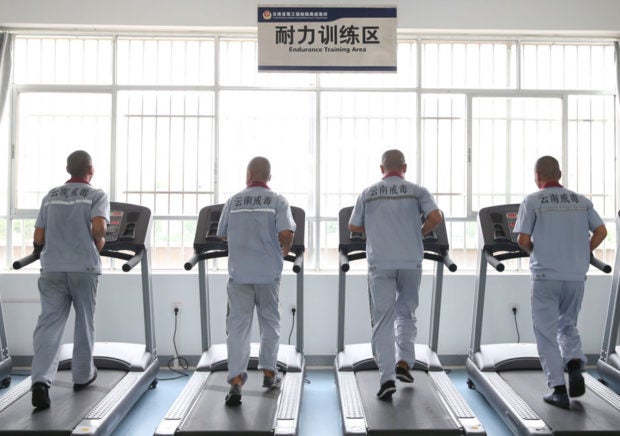 YUXI/YUNNAN — Lin Cong (not his real name) raises 1,000 chickens on the third floor of his parents’ house. Every day, he carries water upstairs, feeds the chickens and cleans the coops. He has a cat and a dog, but his pigeons are his favorite pets.

The 34-year-old lives in a three-story house built by his father in 1984 in the suburbs of Yuxi, a city in the center of Yunnan province that is renowned for tobacco cultivation and cigarette manufacturing.

The southwestern province is the main battlefield in the fight against drug abuse because it borders the Golden Triangle, the place where Laos, Myanmar and Thailand meet, an area known for rampant drug production and trafficking.

The taciturn Lin prefers being alone with his animals to speaking with people. His parents, both in their 60s, sell the chickens he raises as the family’s main source of income.

“If he hadn’t been ruined by drugs, the family would have a better life,” Lin’s father said.

In 2008, some friends taught Lin how to smoke heroin, and he later became addicted to methamphetamine, aka “ice”. In 2010, he was placed in an isolated facility for two years, where he underwent compulsory detoxification in accordance with the law.

“Drug abuse caused damage to his nerves. He is slow to respond,” Lin’s father said, adding that he is relieved that his son has abstained from drugs since he had the treatment seven years ago.

“It’s a long time,” said Yang Yunfeng, head of a follow-up program in Yuxi that provides three years of supervision, guidance and help for former drug users after they are released from the detox center.

In 2014, Yunnan launched 50 follow-up programs. To date, they have provided assistance for about 11,000 people, with a relapse rate of just 30 percent, according to the Yunnan Drug Rehabilitation Administration.

“After abstaining from drugs, they still face a tough road reintegrating with society,” Yang said. “Most have difficulty finding work. Many lack their family’s guidance and support, and some have health problems. As a result, they tend to give up on themselves and regain the habit, even commit crimes.”

While taking drugs means addicts are automatically lawbreakers, many also fall victim to the physical and mental damage that often results from narcotics use.

“During the years of addiction, I engaged in every type of activity to get money to buy drugs,” said Wang Yu, 30, from Yuxi.

In 2010, Wang (not his real name) saw two friends getting high on heroin. “They placed the white powder on some foil, held it over a flame and sucked in the smoke,” he said.

He joined in out of curiosity, but the first hit didn’t give him the anticipated sense of euphoria – in fact, he just lay in bed, feeling dizzy. However, the next day, he bought some heroin voluntarily and smoked it. Later, he started injecting. “The rush was greater and faster,” he said.

Wang spent about 8,000 yuan ($1,163 at today’s rates) a month on his habit. “As soon as I got some money, I would buy drugs. If I had enough, I would take drugs several times a day,” he said. Apart from his income from a part-time job in a nightclub, he regularly made up excuses to ask his family for money or begged his girlfriend to give him cash.

“When I cried in front of my girlfriend with my nose running, she agreed out of pity. My family didn’t know about my habit until I was arrested by the police,” he said. He was sent to a local rehabilitation center in 2012. 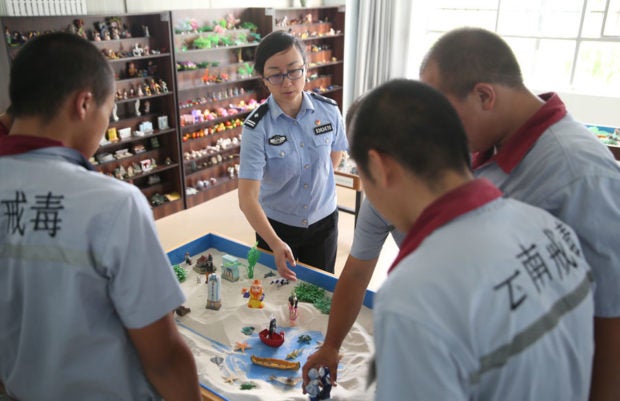 A therapist (second from left) at the drug rehabilitation center in Yuxi treat addicts with sandplay therapy. [Photo by Chen Zebing/China Daily]

Lin, the chicken farmer, is emaciated after years of drug abuse, and the tattoos on his chest and arms can clearly be seen under the neckline and cuffs of his old, loose T-shirt.

“My son was rebellious and smart, and he liked drag racing on the street,” his father said.

Lin sold items he stole from his parents to raise money for drugs. In 2009, he stole 15,000 yuan his father had stashed at home. The money amounted to about half the value of the family’s home.

After an overdose, he succumbed to delusions, paranoia and erratic behavior. “He often shouted out that someone was attacking him and he wanted to call the police,” his father said.

Drug-induced hallucinations led Lin to set fire to a room on the second floor of the family home. Traces of the flames can still be seen on the walls.

Even though Lin’s movements are impaired, he can immediately recall the exact date he was detained by police. On Oct 21, 2010, he and several friends smashed the windows of a car parked on a corner of his block so they could steal items inside and sell them for drug money. They were all high on drugs.

Last month, about 207,000 addicts were undergoing compulsory treatment in drug rehabilitation centers across the country run by the judicial authorities, according to the Ministry of Justice.

Those who undergo compulsory treatment in isolated facilities are classified as seriously addicted and unsuitable for rehabilitation in the community. They are treated in closed facilities for two years.

Dong Chen (not his real name) is in a center in Kunming undergoing his fifth detox program. The 45-year-old started taking drugs when he was 20, and in the years that followed he alternated between abstinence and relapsing.

“Once you get addicted, you spend a lifetime struggling with it. It’s extremely hard to get rid of the psychological addiction,” he said.

Yunnan has the highest number of people undergoing compulsory detoxification in China. Since 2010, centers in the province have received 230,000 addicts, about half of them repeat offenders, according to the provincial rehabilitation administration.

Wang relapsed in 2014, after losing his job in a tobacco factory. He had been working at the plant for three months after leaving rehab, but the company decided to dismiss every staff member with a record of drugs-related offenses.

“I wanted to live my life, but I just couldn’t start over again,” he said, adding that his girlfriend left him at the same time. Jobless and lonely, he hung out with friends who were drug addicts and began using again. In 2016, he was sent back to the detox center.

Yang, from the Yuxi follow-up program, said, “Even though he had vowed not to use drugs again, it was difficult to remain clean in that environment.”

Last year, about 730 people on the program relapsed, accounting for about 43 percent of the total, she said. 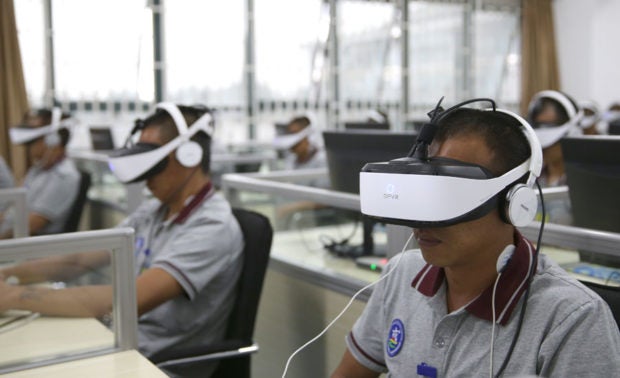 Cao Xuejun, director general of the Drug Rehabilitation Administration Department at the Ministry of Justice, said the follow-up programs were launched to facilitate addicts’ return to family life and society.

“It’s difficult to ascertain the rate of repeat addiction nationally, but generally, the longer people spend outside the detox centers, the more likely they are to relapse,” he said.

“The aim of compulsory detoxification is to ensure that former addicts won’t take drugs again after returning to society. However, repeat addiction is a complicated problem, involving familial and societal factors. With a job and family support, people are more likely to remain clean,” he added.

“Conversely, if their families don’t accept them and they become socially isolated, it’s easy for them to hang out with drug friends and become addicted again.”

Lin was one of the first people to receive help from the Yuxi follow-up program when it was launched in 2014.

Yang, the program head, remembers the first time she visited Lin’s parents. They told her he often lay awake at night talking to himself, and he had typical addicts’ traits, such as trembling hands.

Now, she usually takes a doctor to assess Lin whenever she visits the family.

“Lin’s parents set a good example. They kept a close eye on their son and taught him to raise chickens for a living, but they are getting old, so I visit often to help them solve problems,” she said.

Last year, he married a divorcee who has a 4-year-old son. “My family’s support constantly reminds me to stay clean,” he said.

Yang said, “Wang is becoming more willing to cooperate with me,” adding that he discusses his condition with her and regularly visits the police station for urinalysis tests.

“Helping former addicts to better adapt to society requires help from everyone. We should not judge them too harshly,” she said.

While Wang still hasn’t found a full-time job, he occasionally earns money by installing lamps for people who buy fittings from a store owned by a friend.

Most of the time, though, he stays home, playing with his smartphone. Sometimes he goes fishing with his father.

He and his wife have decided to move to Guangdong province to look for work when his three-year period of post-rehabilitation ends.

Meanwhile, when Lin is not taking care of his chickens, he sits alone in the family courtyard or walks within his neighborhood. He rarely speaks to anyone.