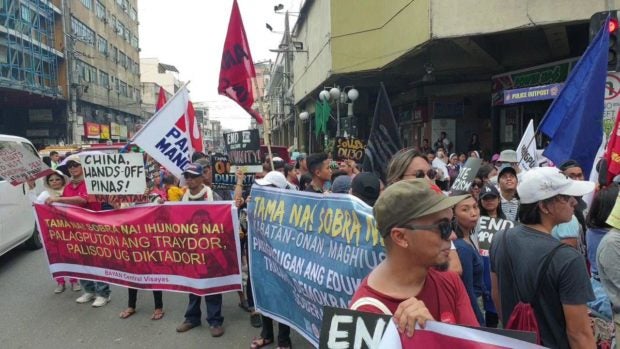 The militant groups marched from Fuente Osmena Circle and converged at a junction in Colon Street to denounce several issues hounding the Duterte administration.

The militant groups aligned with the Bagong Alyansang Makabayan (Bayan) brought with them a mini-dragon effigy of President Duterte draped with flags of the People’s Republic of China and the United States.

Jaime Paglinawan, chairman of Bayan Central Visayas, said they wanted to express their grievances against how President Duterte favored China in the issue of the West Philippine Sea.

“We want the President to defend national sovereignty,” he said.

Paglinawan said they were pushing for the impeachment of President Duterte for violating the Constitution after the latter allowed Chinese fishermen to exploit the Philippines’ exclusive economic zone.

Paglinawan said they also condemned the series of extrajudicial killings as well as the drug war which has resulted in the death of at least 26,000 people.

He said they fully support the investigation called by members of the United Nations Human Rights Commission on the drug war.

The militant group called on President Duterte to fulfill his promises to end all forms of contractualization and the increase in the minimum wage for workers across the country.

“We hope he repeals the Train Law, among other policies, which we believe is anti-poor,” he said.

Paglinawan said they have about 500 to 1,000 participants who took part in the rally in Cebu.

Police, however, estimated the group to be around 150 to 200 people only.

Songs and dances interspersed the speeches.

The street protest capped off with the burning of the President’s effigy as other participants waved their flags while a group went on stage performing songs of protest.

The rally was peaceful and ended around noontime today.

At least eight policemen were deployed near the ralliers to man the traffic and maintain order in the busy Colon street. The police said the ralliers did not hamper the flow of traffic in the area. /lzb