China lashes out at Hong Kong protest targeting its office

HONG KONG – China on Monday harshly criticized a demonstration in which eggs were thrown at its office in Hong Kong and messages spray-painted on the exterior walls. 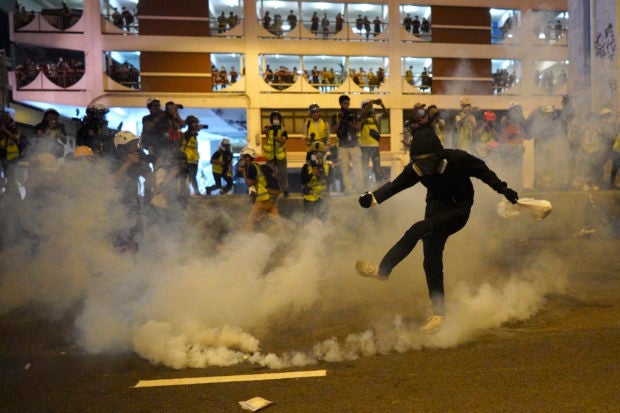 A protestor kicks a tear gas canister during confrontation in Hong Kong Sunday, July 21, 2019. Hong Kong police launched tear gas at protesters Sunday after a massive pro-democracy march continued late into the evening. The action was the latest confrontation between police and demonstrators who have taken to the streets to protest an extradition bill and call for electoral reforms in the Chinese territory. (Ming Ko/HK01 via AP)

One group of protesters targeted China’s liaison office on Sunday night after more than 100,000 people marched through the city to demand democracy and an investigation into the use of force by police to disperse crowds at earlier protests.

Police launched tear gas to disperse the protesters. Later, protesters trying to return home were attacked inside a train station by assailants who appeared to target the pro-democracy demonstrators.

The attack on the liaison office touched a raw nerve in China. China’s national emblem, which hangs on the front of the building, was splattered with black ink. It was replaced by a new one within hours.

Police said on their official social media accounts that protesters threw bricks and petrol bombs at them and attacked the Central police station.

“These acts openly challenged the authority of the central government and  touched the bottom line of the “one country, two systems” principle,” the government’s Hong Kong and Macao Affairs Office said in a statement issued Sunday.

The “one-country, two systems” framework allows Hong Kong to maintain a fair amount of autonomy in governing local affairs, but demonstrators fear the city’s rights and freedoms are being eroded.

A group of pro-China lawmakers held a news conference Monday appealing for a halt to the violence, saying it was a blow to Hong Kong’s reputation and is scaring away tourists and investors.

They also urged police to tighten enforcement against the protesters, whom Ip labels as “rebels.”

“The violent attack on the Liaison Office … is a direct affront to the sovereignty of our country,” said Regina Ip, a former security secretary.

When asked why it took at least a half-hour for police to arrive at the suburban train station and intervene, Ip said the police were “overstretched.”

“The police have been under extreme pressure,” she said.

Video of the attacks in Yuen Long showed protesters in black shirts being beaten by men in white shirts wielding steel pipes and wooden poles. Those under attack retreated into the trains, intimidated by the gangs of men waiting for them outside the turnstiles. The attackers then entered the trains and beat the people inside as they tried to defend themselves with umbrellas. They eventually retreated.

One of the men in white held up a sign saying “Protect Yuen Long, protect our homes.”

Subway passengers filmed by Stand News and iCABLE angrily accused police officers of not intervening in the attack. Stand News reporter Gwyneth Ho said on Facebook that she suffered minor injuries to her hands and shoulder, and was dizzy from a head injury. The South China Morning Post reported several people were bleeding following the attacks, and that seven people were sent to the hospital. /gsg