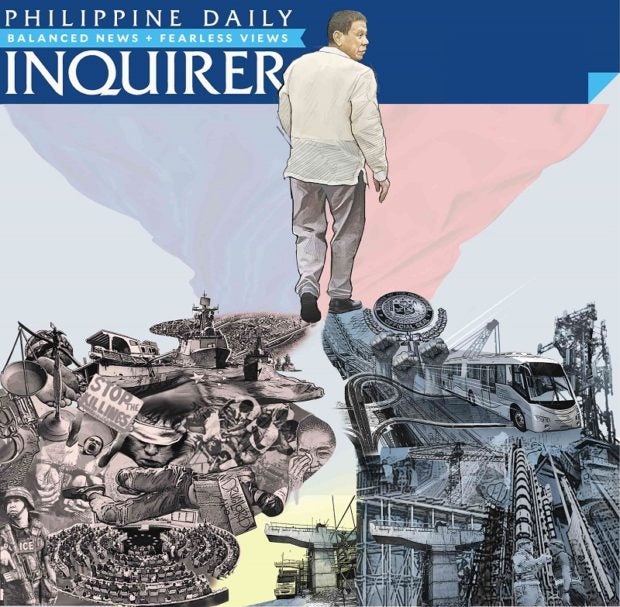 MANILA, Philippines — Buoyed by his high ratings, President Rodrigo Duterte may continue to defend his controversial stand in the Philippines’ territorial dispute with China in the South China Sea and his brutal war on drugs in his speech at the opening of the 18th Congress on Monday.

Thousands of protesters plan to march on the legislative complex in Quezon City to denounce the President’s policies while the Senate and the House of Representatives, sitting in a joint session, listen to the President detail his plans for the second half of his term.

The police and the military have gone on full alert, although no threat to public safety has been monitored.

The annual presidential address to Congress, a borrowing from an American tradition, is a gala affair in the Philippines, with legislators and their spouses coming in formal attire — the traditional barong tagalog for men and the terno for women.

School has been called off at all levels in Quezon City to ease vehicular congestion on the road to the legislative complex.

The joint session starts at 4 p.m.

Maria Ela Atienza, a political science professor at the University of the Philippines, on Saturday said the President’s first three State of the Nation addresses were consistent attacks on his critics and his speech on Monday could be no different.

Atienza noted that the President enjoyed a “renewed mandate” as a result of his allies’ victory in May’s midterm elections and high popularity ratings in opinion polls.

In the latest Pulse Asia poll, the President scored approval and trust ratings of 85 percent.

In the most recent Social Weather Stations poll, his net satisfaction rating was +68 percent.

The President, Atienza said, can be expected to continue defending his war on drugs, especially with the United Nations Human Rights Council’s recent decision to investigate the thousands of alleged extrajudicial killings in his crackdown on narcotics.

He can also be expected to continue attacking Western countries for interfering in Philippine domestic affairs and imposing their own standards on the Philippines “without understanding actual conditions” in the country, she said.

And as in the past, the President may also “continue attacking [his] local critics, particularly institutions like the [Catholic] Church and opposition groups that claim human rights have been sacrificed in the war on drugs,” Atienza said.

The President, she said, can also be expected to “lecture” on the constitutionality of his verbal agreement with Chinese President Xi Jinping allowing Chinese to fish in Philippine waters in exchange for China’s allowing Filipinos to fish at Panatag Shoal, a traditional fishing ground for Filipinos that China seized in 2012.

He may also continue to defend his policy of greater cooperation with China amid widespread criticism of his handling of the June 9 sinking of a Philippine fishing boat in the South China Sea after being hit by a Chinese trawler, which then abandoned the boat’s crew in the open sea.

Press Secretary Martin Andanar, speaking in a radio interview on Sunday, said the President could mention the South China Sea territorial dispute in his speech, but whether he would lecture on the legality of his fishing deal with Xi depended on his mood. 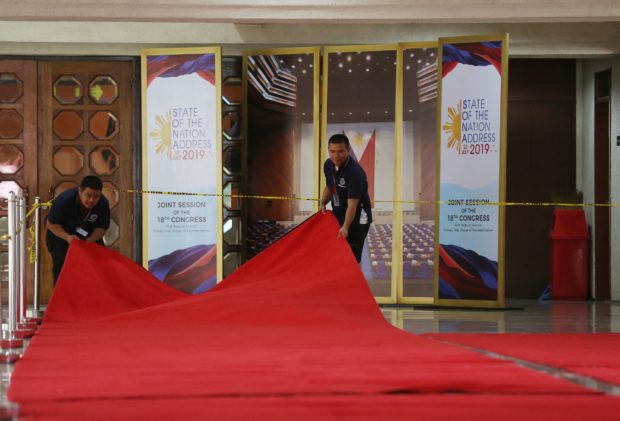 RED CARPET WELCOME Utility workers roll out the red carpet at the North Wing lobby of the Batasang Pambansa Complex in Quezon City as part of preparations for President Duterte’s State of the Nation address on Monday. —NIÑO JESUS ORBETA

“It is highly possible that he will mention the West Philippine Sea and his stand,” Andanar said, using the local name for the waters within the Philippines’ 370-kilometer exclusive economic zone in the South China Sea.

“If he will deliver a lecture, off the script, I don’t know. That will depend on the prerogative and mood of the President,” Andanar said.

He said the President cut his speech from 28 pages to 19 pages during a rehearsal at the Palace with film and television director Joyce Bernal.

The speech may run for 45 minutes to an hour, depending on Mr. Duterte’s reading speed and on his veering off the script, as he is wont to do, Andanar said.

Real state of the nation

Senators on Sunday urged Mr. Duterte to speak about the real state of the nation.

Senate President Vicente Sotto said he wanted to hear the President focus on bringing down the number of drug dependents through a “demand-reduction strategy.”

“The day we stop [people] from buying [illegal drugs] is the day they (drug dealers) stop selling,” he added.

Detained Sen. Leila de Lima said she hoped Mr. Duterte would dispense with his usual “crude jokes” and just discuss the realities in the country.

She said Mr. Duterte should explain to the public his defeatist stance in the country’s territorial dispute with China and the government’s failure to stem the proliferation of illegal drugs despite his bloody crackdown on narcotics.

“Mr. Duterte should admit to the Filipino people that his war on drugs achieved nothing but spill the blood of his countrymen,” De Lima said in a statement.

“The Senate will be listening. Even with a giant list of legislative priorities, we are ready to help craft necessary laws that will benefit the people,” Binay said.

Environmental groups last week said they hoped the President would talk about the destruction of the country’ patrimony in China’s aggressive encroachment on the West Philippine Sea.

According to the Kalikasan People’s Network for the Environment, the Duterte administration has sold at least P773 billion worth of sovereign resources since coming to office.

It said the figure was the estimated total value of marine resources destroyed by Chinese vessels in the West Philippine Sea since 2016 and the value of land and water resources promised as guarantees for the loans for the Kaliwa Dam and Chico River irrigation projects.—Reports from Julie M. Aurelio, Jeannette I. Andrade, Marlon Ramos and Jhesset O. Enano