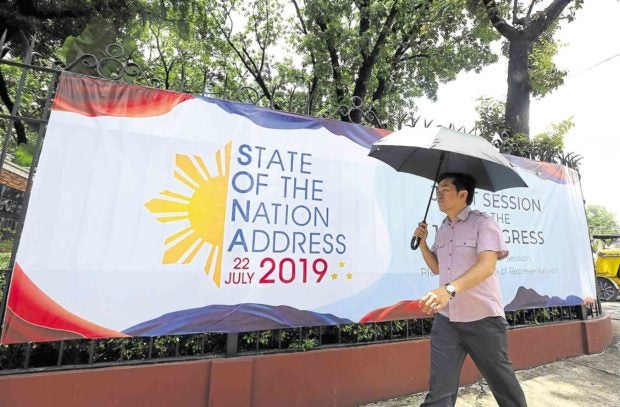 A three-day lockdown at the House of Representatives has been in effect since Friday, July 21, 2019, and will last until Monday, July 21, as part of security measures for the fourth State of the Nation Address of President Rodrigo Duterte. (Photo by NIÑO JESUS ORBETA / INQUIRER.net)

MANILA, Philippines — As of Sunday, the Armed Forces of the Philippines (AFFP) not monitored any terror threat to the fourth State of the Nation Address (Sona) of President Rodrigo Duterte, which he will deliver on Monday, according to Col. Noel Detoyato, AFP spokesperson.

“While the AFP has not monitored any threat from local terrorist groups, its forces will continue to be on a proactive stance against all threats of violence and will exert every effort to preserve the peace, particularly in the National Capital Region where the seat of the government is in,” Detoyato said in a statement.

According to him, the AFP has been on red alert since Friday morning in preparation for the Sona.

That means troops are on standby, ready for dispatch in case the Philippine National Police (PNP) would need help in ensuring public safety.

Detoyato also called on the public to remain vigilant and report any suspicious individuals and activities in their areas.

“The fight against terrorism and the preservation of peace are a shared responsibility of everyone. So we should all do our part in this whole of nation approach towards peace and development,” he said.

According to presidential spokesperson Salvador Panelo, the President is expected to discuss the issue of the West Philippine Sea, among other matters, in his Sona.