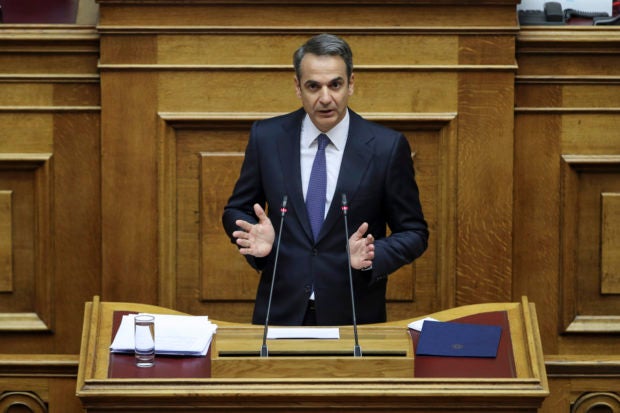 Mitsotakis announced he would immediately implement a reduction in property taxes while opening a three-day parliamentary debate on his new conservative government’s policy statement.

He said he will stick to the fiscal targets demanded by Greece’s creditors that the previous left-wing government agreed to meet,  including an “excessive” primary budget surplus equivalent to 3.5% of gross domestic product, adding that he would try to negotiate different terms next year.

Mitsotakis also promised to abolish laws that made it easier for convicted felons and terrorists to be released from prison early and to re-establish maximum security prisons the previous government abolished.

As for the agreement signed with North Macedonia that ended a decades-old dispute over the latter’s name, Mitsotakis said he would “alleviate (its) negative effects,” notably by protecting the labeling as “Macedonian” of goods produced in the Greek province of Macedonia.

Mitsotakis kept his attacks on his predecessor Alexis Tsipras to a minimum saying: “We are not enemies, we do not seek each other’s political demise. The era of rage, of recriminations is over.” He did rejoice at the absence from Parliament of “this repulsive Nazi entity,” the extreme-right and anti-immigrant Golden Dawn party, which narrowly failed to reach the required 3% threshold to enter parliament.

In his speech, Tsipras defended his record, said Mitsotakis could afford to cut taxes because his government put the economy right and warned the government not to privatize the ailing electricity company PPC.

A confidence motion will follow the debate late Monday. /gsg