‘It’s brutal’: Heat wave across half the US cancels events

NEW YORK – Americans from Texas to Maine sweated out a steamy Saturday as a heat wave canceled events from festivals to horse races and pushed New York City to order steps to avoid straining the electrical system. 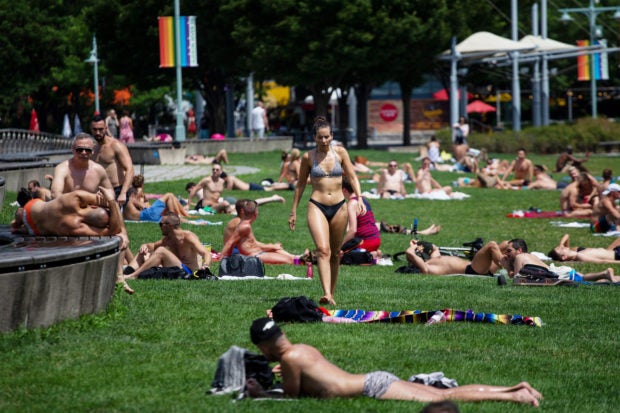 People sunbathe at Pier 45 on Saturday, July 20, 2019 in New York. Temperatures in the high 90s are forecast for Saturday and Sunday with a heat index well over 100. Much of the nation is also dealing with high heat. (AP Photo/Eduardo Munoz Alvarez)

The National Weather Service said “a dangerous heat wave” sent temperatures into the 90s, with high humidity that made it feel considerably hotter.

It was expected to stay warm at night, in the upper 70s to low 80s, with more heat on the way Sunday for the East Coast.

“It’s brutal,” Jeffrey Glickman said as he paused during a run in Washington.

The 37-year-old got out early to try to escape the worst of the heat but still planned to cut his route short on an already 90-degree (32-degree Celsius) morning.

“You just have to power through it the best you can,” he said.

Many people in areas facing excessive heat this weekend have no air conditioning, and cities opened shelters for people to cool off. With record- or near-record-high temperatures at night when many air conditioned places are closed, the weather can become especially dangerous for people who don’t get a chance to cool down, experts say. The risks are greater for young children, the elderly and the sick.

Over three days in July 1995, more than 700 people died during a heat wave in Chicago as temperatures rose above 97 degrees (36 degrees Celsius).

Many of the dead were poor, elderly and lived alone.

While the Midwest will get some relief Sunday as a cold front brings storms and lower temperatures, the East won’t be so lucky until Monday, the weather service warned. The heat will be the worst from the Carolinas to Maine.

In Norwich, Connecticut, Larry Konecny watched as one of his workers a couple of stories up in a boom lift cleaned the outside of an office building.

The pair had no choice but to work in 90-degree heat and stifling humidity because the job needed to be done when office workers were away, Konecny said.

“He’s pressure-washing, so the water is splashing. So at least there’s some degree of refreshment,” he said.

“It’s not the day to be out here. I should have been up much earlier,” she said Saturday morning. “You’ve got to take your time and drink a lot of water and survive, not enjoy. That’s the goal.”

The city also directed owners of many office buildings to set thermostats no lower than 78 degrees (26 degrees Celsius) through Sunday to reduce strain on the electrical grid.

The measure came after a power outage related to an equipment failure, not heat, caused a roughly five-hour blackout July 13 that affected a 40-block stretch of Manhattan, including Times Square and Rockefeller Center.

Storms have knocked out power to hundreds of thousands of people in parts of Michigan and Wisconsin, heightening the misery. Strong wind and rain were expected to persist Saturday night and into Sunday in the Midwest and Central Plains.

In Philadelphia, several hundred people were evacuated from a retirement community due to a partial power outage, though it wasn’t immediately clear whether the problem was heat related.

Residents were taken to a nearby shelter, and police said some went to a hospital for evaluation.

In Chicago, heat nixed several outdoor events, including a 5k run in Grant Park and a morning workout at Millennium Park. It hit 94 degrees (34 degrees Celsius) by first pitch at the San Diego Padres-Chicago Cubs game at Wrigley Field, but some fans didn’t want to stay away, largely watching from shaded concourses.

“We’re sticking to water and not having beer. It’s helping a little bit,” said Jaclyn Jendrisak of St. Louis.

In New Jersey, operators of the Monmouth Park horse racing track canceled six races and pushed back others, including the $1 million Haskell Invitational, until early evening. Maximum Security, the horse that crossed the finish line first in this year’s Kentucky Derby and then was disqualified, headlines the Haskell field.

The track set up misting fans in the paddock and saddling areas for the 14-race card, shortened post parades before the race to limit track time for the horses and hosed them down after they ran.

Amid pressure over a series of horse deaths in California, several tracks canceled their Saturday races, including Saratoga Race Course and Finger Lakes in New York and Laurel Park in Maryland.

At New York’s Yankee Stadium, the temperature hit 94 degrees when the Yankees and Colorado Rockies took the field. Extra hydration stations were set up in all three decks and the bleachers. Announcements reminded fans to keep drinking water.

Yankees manager Aaron Boone said he was mindful of the heat, too.

“You tend to monitor guys a little more closely, want to see how your pitchers are doing,” he said. /gsg