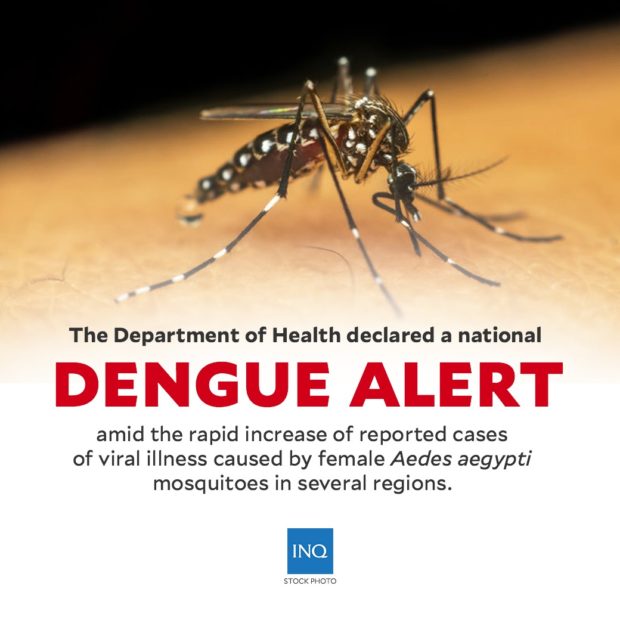 DAVAO CITY, Davao del Sur — It’s the same disease. Yet the contrasting outcomes in the fight against dengue in South Cotabato province, south of Mindanao, and Ozamiz City, northwest of the island, may offer good lessons amid a national alert on the disease.

On Friday, a state of calamity was declared in South Cotabato due to the steep 149% hike in the number of dengue cases, which already claimed 21 lives in the province this year.

Gov. Reynaldo Tamayo Jr. had asked the provincial board, which regularly meets on Monday, to convene a special session to pass the measure, according to South Cotabato Vice Gov. Vicente de Jesus.

Previously, Zamboanga Sibugay made a similar declaration even as the Department of Health announced a national dengue alert.

But in Ozamiz City, Misamis Occidental, the number of dengue cases has dropped since the city government pushed hard for the adoption of measures that focused on preventing new infections and early treatment.

From January to July this year, 333 dengue cases were recorded, a 60% drop from the 833 count for the same period last year, according to Brixlyjun Go, coordinator of the dengue prevention and control program of Ozamiz.

De Jesus said the rise in dengue cases in South Cotabato was alarming.

“Our public and private hospitals are being crowded mostly by dengue patients,” he observed.

The provincial health office said 3,347 dengue cases were recorded from January 1 to July 13 in the 10 towns of the province and the capital city of Koronadal.

For the same period last year, there were only 1,344 cases. This means a steep 149% increase, which is already “above the epidemic threshold,” according to the provincial health office.

Following is a breakdown of the cases in South Cotabato:

Tamayo noted that a state of calamity has been declared in Surallah, Tantangan and Norala towns last week due to the dengue outbreak.

A state of emergency was being mulled in Banga and Sto. Niño towns due to the growing count of dengue cases.

Apart from a radical decline in dengue cases in Ozamiz, there were also no more deaths recorded, said Go.

Last year, 13 patients died, many of them schoolchildren.

Go credited the drop in the number of cases for the zero deaths.

“Statistically, the more people infected, the greater the probability of those dying from the disease,” he explained.

Another factor that prevented dengue deaths was the drive for early detection and treatment.

“The earlier a patient avails of medical attention, the faster the recovery and the lesser the probability of dying,” explained Paul Singh, administrative officer at the Ozamiz City Health Office.

“Most of those who died last year were patients who were late in seeking treatment,” Singh said.

“Since then, we have emphasized the need for early detection and treatment. If one has fever, we asked that they immediately consult the health center or the school clinic or the nearest hospital to increase our degree of detection of new infections,” Singh added.

The call for early detection and seeking early treatment when infected was repeated all over the city for several months through a “recoreda” campaign, during which vehicles went from place to place playing a pre-recorded message on dengue.

Included in the information package was the call for destroying mosquito breeding grounds.

“That was the most important message as it underpinned the prevention pillar which, in turn, is the bedrock of our entire fight against dengue,” Singh explained.

The Aedes aegypti mosquito, which breeds in stagnant water, is the main vector that transmits the dengue virus.

A massive information drive was launched to cover 30 of the city’s 51 barangays that have dengue cases.

Apart from the recoreda, community meetings were held at every purok (sub-village), followed by cleanup drives.

These sessions involved elected officials, the Philippine National Police, the Army, health workers, leaders of civic groups, all exhorting people to do their share in the fight against dengue.

“Back then, we drummed up the idea that the cleanliness in every household means the safety of the community from dengue,” Singh recalled.

“Cooperation hit a slow start. But when we brought out the details of dengue deaths, the fear factor moved people to action,” he said.

With increased cooperation, the City Health Office rarely resorted to fogging to drive away the deadly mosquitoes, reserving it for areas where a dengue death had been recorded.

The City Health Office focused on the top 20 schools with high infection rates.

With the consent of the Department of Education (DepEd), Olyset insecticide-treated nets were installed on the windows of these schools with the parents’ association leading the effort.

Sephora Samson, a teacher at Andrea Costonera Elementary School in Barangay Aguada, said the brigade is composed of students from Grades 4 to 6 who led in cleaning and monitoring all possible mosquito breeding sites in the school campus.

They hopped from one classroom to another to check on all water containers, Samson added.

Barangay Aguada, including its elementary school, used to be a dengue hotspot last year. Today, not one among its more than 500 students was infected with dengue.