'An attack on all of us': Anime fans reel after deadly Japan fire |
Close
menu
search

‘An attack on all of us’: Anime fans reel after deadly Japan fire 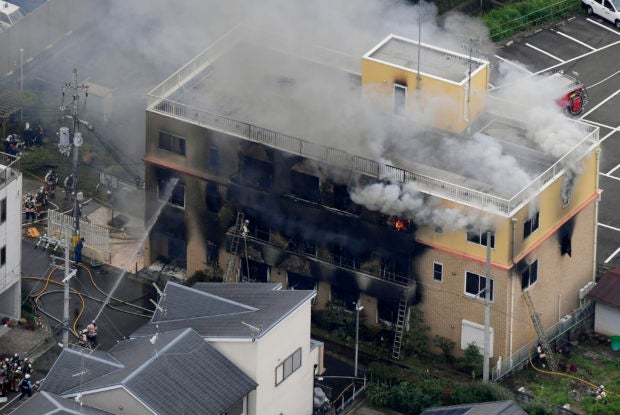 Smoke billows from a three-story building of Kyoto Animation in a fire in Kyoto, western Japan, Thursday, July 18, 2019. Kyoto prefectural police said the fire broke out Thursday morning after a man burst into it and spread unidentified liquid and put fire.(Kyodo News via AP)

TOKYO — A devastating apparent arson attack on a renowned Japanese animation firm has left anime fans and insiders heartbroken, with many likening the fire to a terror attack on their community.

The inferno that ripped through Kyoto Animation on Thursday killed 33 people and injured dozens more at a firm that has delighted fans across the world with its animations of popular manga works.

“Kyoto Animation is home to some of the world’s most talented animators and dreamers,” Apple CEO Tim Cook tweeted after the attack. “KyoAni artists spread joy all over the world and across generations with their masterpieces.”

Founded in 1981, Kyoto Animation might lack the name recognition of Japan’s Studio Ghibli, but to anime fans it is a household name, responsible for beloved television series including “The Melancholy of Haruhi Suzumiya” and “K-ON!”

“They made amazing films. I was heartbroken,” said James Coleman, a 17-year-old tourist walking in Tokyo’s famed anime and gaming district Akihabara on Friday.

“I was really shocked and I was confused as to why anyone would attack a place like Kyoto Animation.”

While many animation studios are based in Tokyo, the firm — known by fans as KyoAni – reportedly felt strongly about remaining in the ancient Japanese city of Kyoto.

“All we can do is remember the work they created,” said French tourist Mederic Theys.

After the fire, anime fans at home and abroad tweeted their support with the hashtag #KyoAniStrong and #PrayForKyoAni.

‘A kind of terrorism’

The motive for the attack remained unclear a day after the devastating blaze. Police have detained a 41-year-old man, with reports suggesting he had accused Kyoto Animation of plagiarism.

Initial speculation had focused on whether a disgruntled employee could be involved, in an industry infamous for underpaying and overworking its artists.

Manga artist Junichi Inoue, author of “Diary of a Chinese Wife”, said he feared the trauma from the attack could cripple creativity among artists in the industry, himself included.

“We must not bend to it. It would be losing in the face of a kind of terrorism,” he added.

Ryusuke Hikawa, a professor at Tokyo’s Meiji University and a specialist in animation, also expressed hope that the attack would not cow the industry, where threats against artists are not uncommon.

“We must not bow in the face of violence,” he told AFP.

“Kyoto Animation and others must continue to produce animations with a message.”

Founded by a husband-wife couple, Kyoto Animation originally specialized in delicate animation tasks usually done by women, and continued to employ many women among its staff.

And unlike many in the sector, it had a reputation as a generous employer, said Hikawa.

“The working conditions were known to be very good, with the staff very well treated in an industry where we often work late into the night,” he said.

Anime and manga are among Japan’s best known modern cultural exports, and form a key plank of the country’s plans to grow its tourism industry.

Would-be artists flock to the country hoping to find work in the sector, and Japanese anime films are regularly nominated for Oscars.

Henry Thurlow, an American animator and director in Japan, said he was horrified by the news.

“It’s an attack on every person working in this industry. We all know each other,” he added.

“The fear and trauma stemming from this attack is going to affect a lot of people for a very long time.” kga

Read Next
Let’s build math, science schools in every province – Gatchalian
EDITORS' PICK
Geek out at TOYCON 2022 powered by Smart Signature
UK’s Boris Johnson will resign, BBC reports
High inflation: Your P1 is now worth only 87 centavos
High-risk pregnancy: Reducing your risk is in your hands
Unemployment rate up to 6% in May
House energy committee chair Arroyo bats for cheap electricity
MOST READ
Suspect in grisly killing of missing woman in Bulacan arrested
Kim Atienza’s daughter flaunts bikini body in response to critics of her ‘revealing photos’
Cop slain in Isabela ambush
FDA probes popular Filipino noodle brand for ‘high level of ethylene oxide’
Don't miss out on the latest news and information.