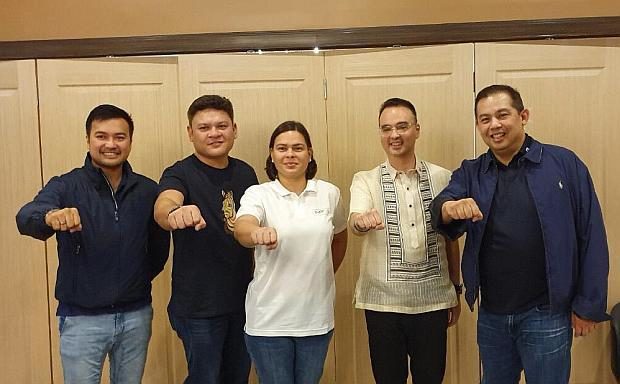 MANILA, Philippines — Warring camps at the House of Representatives are set to solidify their forces before the scheduled election for the next House Speaker on Monday.

Sources privy to the matter revealed this on Friday, saying the camps of presumptive Speaker and Taguig-Pateros Rep. Alan Peter Cayetano and Davao City 1st District Rep. Paolo Duterte invited congressmen to separate meetings in the morning of July 22.

Cayetano’s gathering was set at 8:30 a.m., while Paolo’s “breakfast” would be at 8:00 a.m., Anakalusugan Rep. Mike Defensor and two other sources, who refused to be named but received both invitations, told INQUIRER.net.

A source said the gatherings and the manifesto of “unequivocal” support for the “Duterte Coalition” circulating among House members were aimed at “determining [the] numbers” and “solidifying forces” for the leadership battle.

(“Who would the congressmen follow, the President’s son or the incoming Speaker?”)

Defensor, for his part, said he would attend both meetings.

“I’m going to Cong. Pulong’s because I haven’t seen him for quite a time,” the returning lawmaker said in a text message. 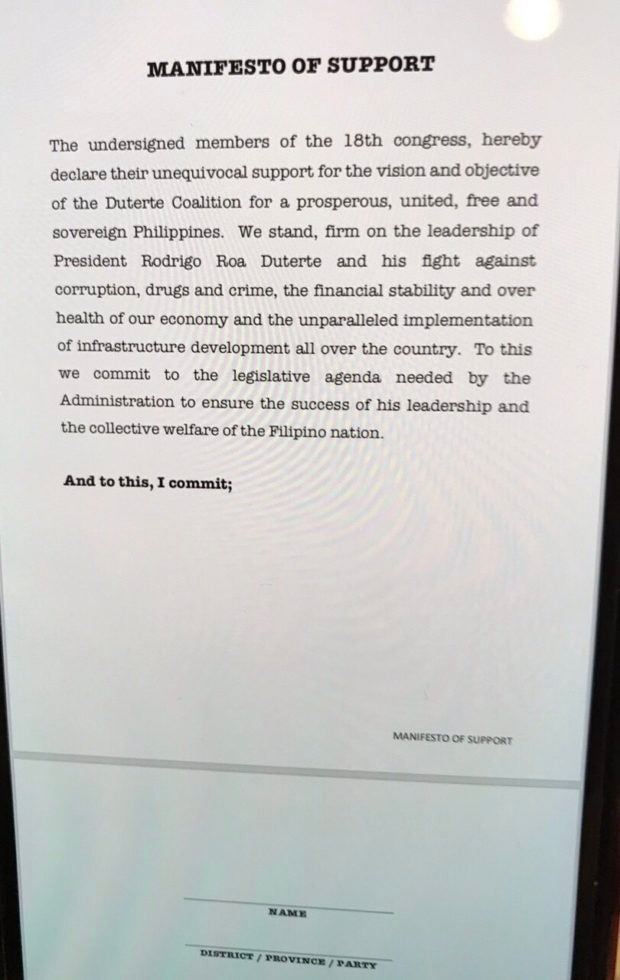 A manifesto of support for the Coalition is also making the rounds in the chamber.

“The undersigned members of the 18th Congress, hereby declare their unequivocal support for the vision and objective of the Duterte Coalition for a prosperous, united, free and sovereign Philippines,” reads the copy of manifesto obtained by INQUIRER.net.

“We stand firm on the leadership of President Rodrigo Roa Duterte and his fight against corruption, drugs and crime, the financial stability and over health of our economy and the unparalleled implementation of infrastructure development all over the country. To this we commit to the legislative agenda needed by the Administration to ensure the success of this leadership and the collective welfare of the Filipino nation,” it added.

Days after, Paolo claimed that the battle for the top House seat is far from over, as a coup would take place on Monday.

(“There is an election for Speaker on July 22, I’m more interested in that. There are rumors that a candidate is planning to stage a coup d’ etat on that day. It appears the speakership race is far from over.”)

The President, however, shot his son’s claim and branded it as “wishful thinking.” He expressed confidence that Cayetano would get enough votes to win the speakership election at the inaugural opening of the 18th Congress.

For a party-list lawmaker though, the recent developments have “confused” rather than enlighten them.

“[The situation is] very fluid now, there [is] the children factor. As of now, we are bit confused but just holding the ground,” the representative said. /jpv

Read Next
DOJ forms 3-man panel to handle case vs VP, others over ‘Bikoy’ video
EDITORS' PICK
LGUs must issue fare matrix to allow tricycles to operate — DILG
Cherry Mobile teams up with Cloud Panda PH, launches online store
COOCAA TV Bounce Back Sale offers up to 50% off
Employers may monitor staff in work-from-home setup — NPC
Smart launches new LTE-Advanced Pocket WiFi Plans starting at P699 per month
Philippines’ COVID-19 cases surge to 20,626, deaths near 1,000-mark
MOST READ
Lacson to Duque: ‘Just go’
‘Ang Probinsyano,’ other ABS-CBN programs to return as new channel set to emerge
Duterte lambasts Trillanes anew: ‘You did nothing but glorify yourself’
Philippines’ COVID-19 cases surge to 20,626, deaths near 1,000-mark
Don't miss out on the latest news and information.