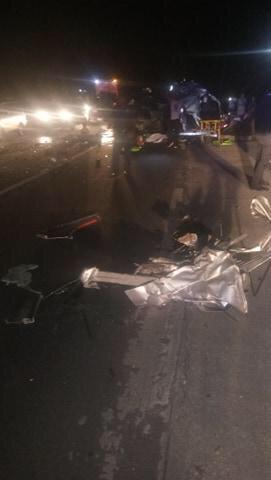 MANILA, Philippines — Three members of a family and their driver were killed while six others were injured in a multiple vehicle collision in Barangay Malay, Lopez, Quezon province, police said Friday.

A report from the Quezon Provincial Police said a  Bicol-bound P & O Bus Corporation passenger bus driven by Marlon Ricon, 37, overtook another vehicle while traversing the Maharlika Highway in Barangay Malay at 11:55 p.m.

When the bus returned to its lane, it collided with the oncoming Toyota Hi-Ace van driven by Carnate, 47, on the opposite lane.

After hitting the van, the bus then collided with a tricycle and a parked Honda Civic parked near the area.

Police said the victims were brought to the Magsaysay Memorial Hospital but four of them were declared dead on arrival. The other victims are still being treated at the hospital.

Police said Ricon was arrested while the incident is being investigated. Police said  complaints of Reckless Imprudence Resulting in Multiple Homicide, Physical Injury, and Damage to Property are now being readied against Ricon.  /muf /lb