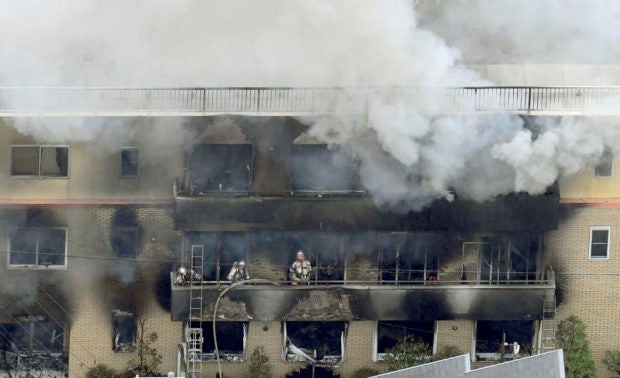 Firefighters work as smoke billows from a three-story building of Kyoto Animation in a fire in Kyoto, western Japan, Thursday, July 18, 2019. Kyoto prefectural police said the fire broke out Thursday morning after a man burst into it and spread unidentified liquid and put fire. (Kyodo News via AP)

Kyoto fire department official Mikihide Daikoku said 36 others have been injured, some of them critically.

Daikoku also said firefighters found more than a dozen people presumed dead on the top floor of Kyoto Animation’s three-story building, some of them collapsed on the stairs leading to the roof.

Authorities said 20 people have been now confirmed dead, with nearly 10 others presumed dead. The outcome makes the case the deadliest fire since a 2001 fire that killed 44 in Tokyo’s Kabukicho entertainment district.

A man is suspected of starting the fire Thursday. He is among those injured and being treated in a hospital.

The president of a popular Japanese animation production company that was gutted in a deadly fire has said his company has received anonymous death threats.

Hideaki Hatta, head of Kyoto Animation, told reporters the company had gotten threats by emails in the past but responded “sincerely” each time.

Hatta asked, “Why on earth did such violence have to be used?”

Kyoto prefectural police earlier said the fire broke out Thursday morning at Kyoto Animation after a man burst in and spread unidentified liquid that set off the blaze.

Rescue officials have set up a tent outside the building to provide first aid and sort out the injured. Fire department officials said more than 70 people were in the building at the time of the fire, but most of them ran outside. /kga