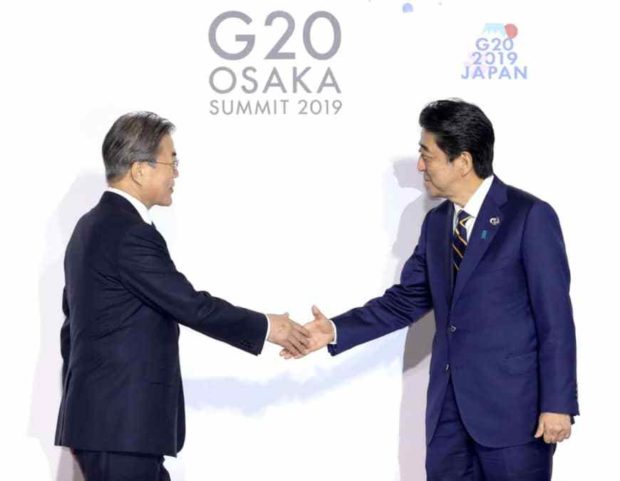 SEOUL — South Korea offered no answer Thursday to Japan’s call to settle the row over Tokyo’s wartime forced labor through third-country arbitration, raising tensions further between the neighbors, with both countries turning down resolution proposals from the other.

Seoul intentionally missed Thursday’s deadline by which Tokyo demanded Seoul respond to its request to resolve historical disputes stemming from its 1910-45 colonization of the Korean Peninsula while hinting at possible retaliation measures if ignored.

“I don’t think we need to be restricted by the date set unilaterally and arbitrarily by Japan,” Foreign Ministry spokesperson Kim In-chul told reporters during a regular briefing.

A Foreign Ministry official urged Japan Thursday to find a way forward through dialogue to come up with rational measures based on a proposal offered by Seoul in June, which was immediately rejected by Tokyo.

The government had proposed that South Korean and Japanese firms create a joint fund to compensate victims of forced labor.

On Wednesday, a senior government official also stressed that Seoul wants to resolve the issue through dialogue and consultation.

“I hope we can settle them (the issues) through this construct of dialogue and common consultation. We will hope that it could be the solution. We would prefer to be engaged through dialogue,” the official said.

Heightening the tensions is Tokyo’s recent decision to restrict exports of high-tech materials to Korea, which Korea believes is a retaliatory measure in protest of the Supreme Court’s rulings.

The curb on exports of specialty materials vital to South Korea’s technology sector triggered concerns on disruptions in the global supply chains and declines in tech stocks.

The Foreign Ministry has been reiterating the government’s stance with respect to the Supreme Court’s decision. A ministry official noted that the asset sale plan is within Korean law. But he added that the government is mindful of other factors, such as how to ease victims’ pain while preserving relations with Japan.

Japan believes its brutal actions during the colonial period were settled in a 1965 treaty normalizing ties between the two countries.

The Japanese government is reportedly considering taking the economic row with Korea to the International Court of Justice, as the deadline for seeking arbitration passed Thursday.