US suspect in NK Embassy raid released on bail 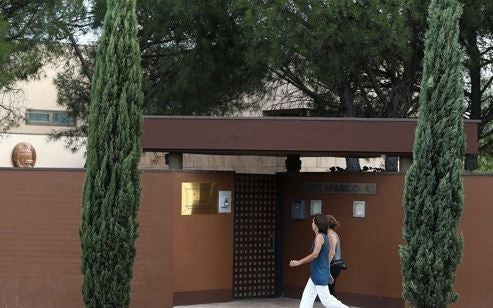 SEOUL/LOS ANGELES — A US citizen accused of involvement in a raid on the North Korean Embassy in Madrid in Feb. has been released on bail as he awaits a court trial on possible extradition to Spain.

Christopher Ahn, a 38-year-old Korean-American and former Marine, was released Tuesday for a $1.3 million bail under the condition of home confinement.

He was arrested in April following an extradition request from Spain, which has accused him and his anti-North Korea group of raiding and stealing computers and documents from the North Korean mission on Feb. 22.

A California judge ordered Ahn’s release earlier this month, though he has to wear an ankle monitor and remain at home except for medical appointments and church.

Ahn is a member of Free Joseon, which has claimed responsibility for February’s raid and said it shared the stolen materials with the FBI.

Adrian Hong, who has been named as the leader of the intruders, is also wanted in the United States but remains in hiding.

In an earlier statement, the group said it consists of members both in and outside North Korea, and is committed to ending the Kim family’s hereditary succession.

Previously known as Cheollima Civil Defense, Free Joseon also said they rescued Kim Han-sol, the son of Kim Jong-nam, after the elder Kim was assassinated by his half brother and North Korean leader Kim Jong-un in 2017. Yonhap