Clark airport worker hailed for turning over misplaced US$1,000

MANILA, Philippines – A utility worker at the Clark International Airport was hailed for her honesty after returning an envelope containing US$1,000 that was misplaced by a departing passenger last July 14. 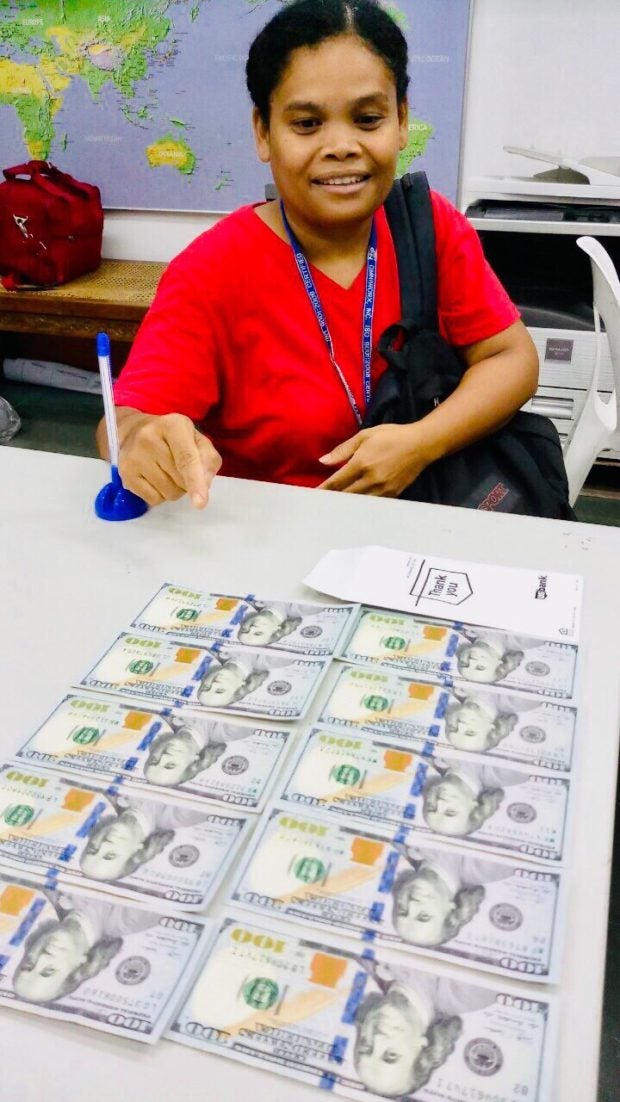 HONEST CLARK AIRPORT WORKER – Clark International Airport utility worker Grace Laxamana turns over an envelope with US$1,000 left behind by a passenger. Laxamana was hailed by airport authorities for her honesty. (Photo courtesy of CIAC / DOTr)

The Clark International Airport Corporation (CIAC) said on Thursday that Grace Laxamana, a 42-year-old Aeta, found an envelope on one of the chairs at the second floor of the international departure area at about 2:50 p.m.

“I thought it was just play money and immediately took the envelope and turned it over to airport operations officer Raymund Salazar who examined the contents. It turned out that the money was genuine,” a CIAC press release quoted Laxamana as saying.

Upon reviewing the CCTV footage of departing travelers on July 14, authorities found that one of the passengers dropped a white envelope while about to board Cebu Pacific flight 5371 bound for Singapore.

CIAC president Jaime Melo commended Laxamana for her honesty, describing her action as “truly worthy of emulation by all airport employees.”

“We’re proud of what Ms. Laxamana did. Her honesty is even more apparent since what she found was an untraceable envelope. Her good deed is truly worthy of emulation by all airport employees,” Melo said in the press release.

As of Thursday, Melo said no one has claimed the money.

The CIAC said Laxamana started working at the Clark Airport in 2006 and part of her job as janitress is to report to operations staff unattended items in the airport.

“We assure passengers of our strict policy to immediately turn over or return lost or abandoned items to their rightful owners,” Melo said. /gsg