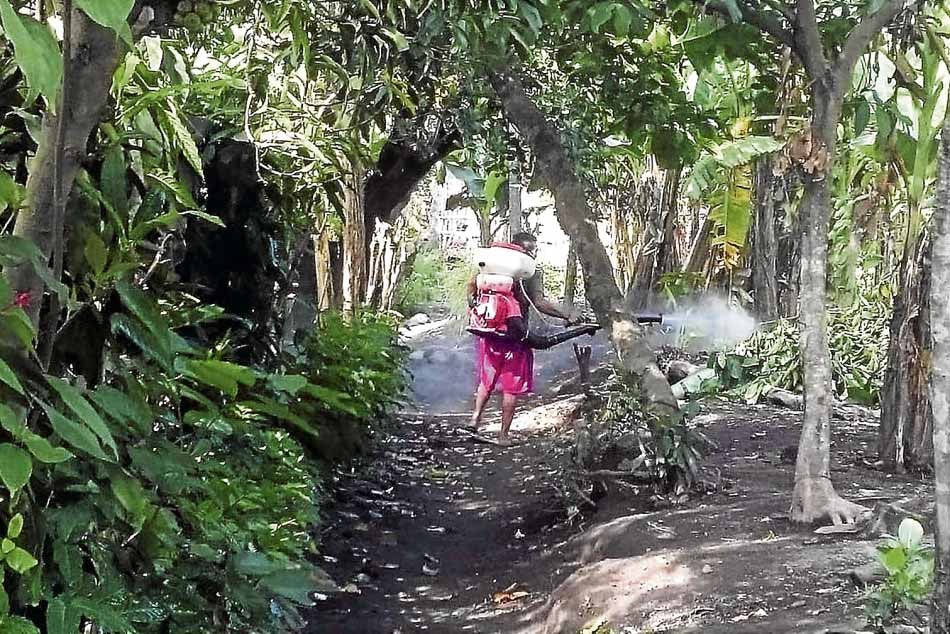 SMOKING OUT MOSQUITOES A health worker conducts fogging in Barangay Masarawag in Guinobatan, Albay province, as part of measures to stop the spread of the dengue virus. —MICHAEL JAUCIAN

A state of calamity has been declared in Zamboanga Sibugay province in Mindanao following a sharp rise in dengue cases, while Camarines Sur, Sorsogon and Albay provinces in southern Luzon have been classified as dengue “hot spots.”

Zamboanga Sibugay has seen an almost 2,000-percent increase in the number of dengue cases since January while Bicol region has recorded an 84-percent jump.

The Department of Health (DOH) has declared a dengue outbreak in four of the five provinces of Western Visayas — Aklan, Antique, Capiz, Guimaras and Iloilo. On Monday, it raised a national dengue alert.

There is no known cure for dengue fever, which is caused by a virus spread by the Aedes aegypti mosquito. The disease can be fatal.

On Tuesday, the provincial council of Zamboanga Sibugay unanimously voted for a resolution declaring a state of calamity after the DOH regional epidemiology bureau noted an alarming 3,005 dengue cases from January to July 15.

There were only 150 cases in the same period last year.

The declaration was endorsed by the Provincial Disaster Risk Reduction and Management Office and the provincial health office.

“With the province now under a state of calamity, more resources will be provided to stop the spread of dengue,” said Dennis Baguio of the Office of the Governor.

Baguio said the first towns to declare a dengue outbreak were Diplahan, Buug and Ipil.

In Iloilo City, dengue cases had so far reached 718 with four deaths as of July 6.

Among the latest to be infected was a councilor, Ely Estante, who was confined at Iloilo Mission Hospital on Monday evening. His tests results showed a below-normal platelet count.

Interior Secretary Eduardo Año has called on local chief executives on Wednesday to undertake antidengue measures in their areas.

In a statement, Año called on all local government units (LGUs) to immediately undertake cleanup drives to eliminate mosquito-breeding areas and stop the spread of dengue.

“The alarming increase of dengue cases in several areas should prompt LGUs to act now and act fast in arresting the spread of dengue in their respective areas. We should not allow dengue to debilitate our communities,” he said.

He asked local governments to coordinate with the DOH in identifying breeding areas and in taking steps for the effective containment of dengue-virus carrying mosquitoes.

In Iloilo City, classes in some schools have been suspended to give way for cleanup activities. Students have been advised to wear knee-high socks, long pants and long-sleeve shirts.

A total of 2,660 dengue cases were recorded in Bicol in the first seven months, up from 1,448 cases in the same period last year, said DOH regional director Ernie Vera.

Two cases have no specified location.

According to DOH regional epidemiology surveillance units, 13 villages were affected in Camarines Sur, nine in Sorsogon, and six in Albay.

Ernie Vera, DOH director for Bicol, said a synchronized sanitation program and more aggressive implementation of the 4S strategy in the community could prevent the further spread of dengue.

The 4S strategy stands for search and destroy mosquito breeding places; self-protection measures; seek early consultation for fever as early as one day; and say yes to fogging as a last resort when there is an impending outbreak. —With a report from Jeannette I. AndreITH A REPORT FROM JEANNETTE I. ANDRADE