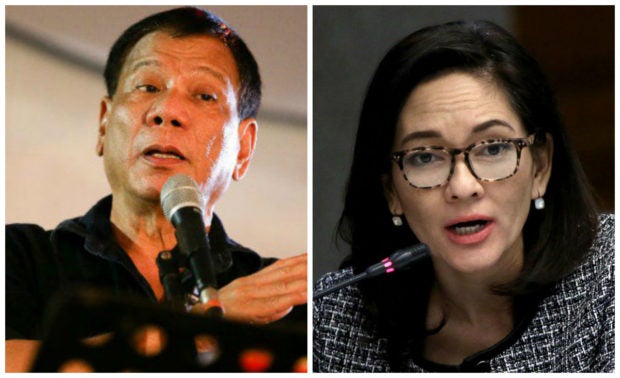 “I challenge the President to follow to the letter the very law he signed and set an example not only as a law-abiding citizen but as a leader who respects everyone,” Hontiveros, who was among principal authors of the law, said in a statement.

The President had drawn flak over his comments about women that some groups deemed to be sexist and misogynistic.

Those comments were often dismissed by the Palace as merely jokes.

On Tuesday, presidential spokesman Salvador Panelo said: “Since the President signed that law, it means that he recognizes the need for that law. Since he’s the chief enforcer of all the laws in the Philippines, he’ll be the first one to obey that law.”

Duterte signed the law — formally known as the Safe Spaces Act (Republic Act No. 11313) — on April 17. A copy of the law, however, was only released to the media last July 15.

Hontiveros questioned the late the release of the copy, saying: “I find it odd that after the Bawal Bastos Act lapsed into law last April 19, as confirmed last May by then officer-in-charge Justice Secretary Menardo Guevarra, Malacañang suddenly came up with a copy of the law yesterday signed by President Rodrigo Duterte dated April 17.”

“Either this is another case of incompetence on the part of the Duterte government or this is an attempt to rob women and the LGBT community of our historic victory, whitewash the President’s unparalleled sexism and misogyny, and claim the law as their own achievement leading to the fourth State of the Nation Address,” the senator added.

Hontiveros called the passage of the law as a “victory of women, LGBTs, advocates and legislator-champions.”

“We will not allow ourselves and our hard-fought victory to be used to deodorize state-sanctioned misogyny and gender-based harassment,” she said. “The passage of the Bawal Bastos Law is the victory of women, LGBTs, advocates and legislator-champions. It is ours alone.”

With the passage of the law, the senator warned “sexists, misogynists, gender bigots and sexual harassers.”

“Whether gender-based harassment is done to women public servants or to ordinary citizens, I expect the full implementation of the law. Bawal na si Boy Bastos!” Hontiveros said.

Panelo: Duterte will be first to obey ‘Bawal Bastos’ law