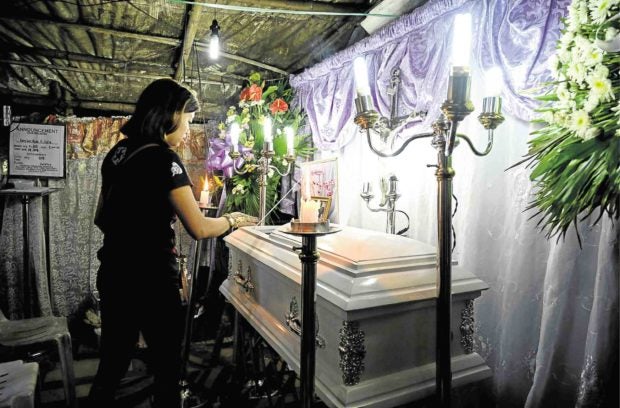 Lydjay Acopio views the remains of her 3-year-old daughter Myka Ulpina, who was killed during a police antidrug operation in Rodriguez, Rizal, on June 29. (Photo from AFP)

MANILA, Philippines – Kateleen Mica Ulpina, the three-year-old kid caught in the crossfire of a gunfight during a drug buy-bust in Rodriguez, Rizal, died of “brain injury secondary to a penetrating gunshot wound,” according to a police official, citing the result of an autopsy.

Brig. Gen. Rolando Hinanay, director of Philippine National Police Crime Laboratory, said in a phone interview Tuesday that the bullet that killed Ulpina entered through the child’s nape and exit through her left ear.

He said the size of her wound is “compatible” to one that would be made with a bullet of a 9mm pistol, which he said were used by most of the police officers during the buy-bust.

Ulpina was believed to have been used by his father Renato Ulpina as a human shield during the exchange of gunfire between him, another cohort, and police officers during the June 29 operation.

According to Hinanay, investigators found a .45-caliber pistol near Renato’s body, which they believe was the gun he used.

Besides Mica and her father, another suspect was killed, along with Senior Master Sgt. Conrad Cabigao, who acted as the poseur buyer in the operation.

In an earlier interview, Col. Joseph Arguelles, assistant commander of the special investigation task group probing the incident, said investigators had also finished conducting ballistics tests on the firearms of 20 officers from Rizal, to determine which gun the bullet that killed Ulpina came from.

These officers, including the chief of Rodriguez police, have been relieved from their posts pending investigation.

The results of the ballistics test have yet to be released to the media as of this posting, but Arguelles said most of the relieved officers would face administrative charges for alleged irregularities during the operation.