A young boy’s birthday took a turn for the worse when his house went up in flames hours before his special day last Thursday, July 11. 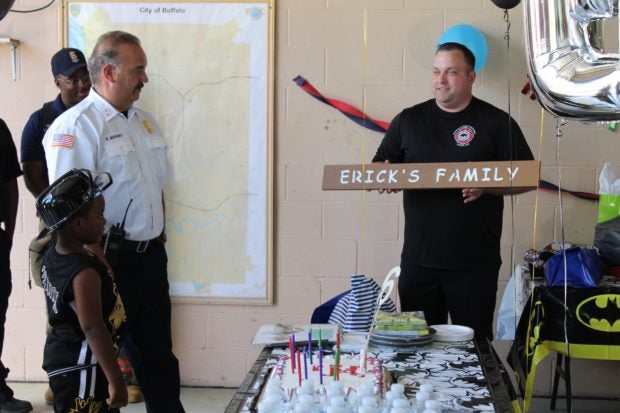 Some of the firefighters at the surprise party for Erick Hill  (Image: Facebook/Buffalo Professional Firefighters Local 282)

After the firemen put out the flames, the house was deemed a total loss, including all the presents for the 6-year-old.

The firemen who responded to the fire accident threw a surprise birthday party for Hill on July 14, to make up for his initial celebration that was canceled due to the tragedy.

“We decided to get together, throw him a birthday party, shower him with a lot of gifts, invite his family here and show him that there is a second family out there that he can rely on,” Buffalo Fire Commissioner William Renaldo was quoted as saying.

The firefighters treated the boy and his family members to a lively celebration at the fire department, complete with balloons and a cake. People dressed as superheroes Batman, Shazam and Supergirl also dropped by the party.

A firefighter named Bryan Matteson even built a toy box as a gift for Hill, after discovering the boy had lost so much in the fire.

“The front of the toy box is a chalkboard, both sides are magnetic and the top has the LEGO grid. FF Matteson has a huge heart. Thank you Bryan!” The Buffalo Professional Firefighters Local 282 said via Facebook yesterday, July 15.

Gift for Erick Hill made by Firefighter Bryan Matteson of Ladder 6, 4th Platoon. FF Matteson made this toy box in 2…

“There’s no amount of thanks that you can give for all of this,” Jones said in an exclusive interview with WGRZ. “All the gifts, all the time, they didn’t have to do it, like you said, and I’m just so grateful.”

The firemen have named Hill an honorary member of their unit, and said he is welcome to drop by any time. Jones also set up a GoFundMe page recently to help her and her family get back on their feet after the tragic incident.  Ryan Arcadio /ra