Drivers were quick to get out of their cars and use their sticky fingers when money fell out of an armored truck and onto a road in Georgia, United States.

Police were notified of the odd incident after receiving a 911 emergency call about an armored truck which had spilled cash on a road last Tuesday, July 9. 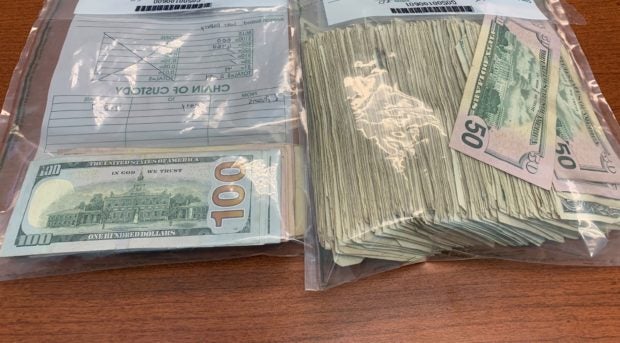 Some of the money recovered from the incident. Image: Facebook/Dunwoody Police Department

Callers reported that more than 15 cars had pulled over and the drivers were frantically picking up money, as per Dunwoody Police Department post on Facebook last Wednesday, July 10.

Heads up Dunwoody, it's cloudy with a chance of cash… Last night around 8:00 PM, Dunwoody officers responded to the…

Police located the armored truck upon arriving at the scene. The crew handling the armored vehicle said its side door came open while they were driving, and the cash inside it had spilled to the road.

A Twitter user who goes by the handle @lungaxhamela shared a video of people picking up money from the road following the incident.

Although a huge amount of the money had already been taken by passersby, authorities were still able to gather a few hundred dollars that were still on the road. Police did not disclose the exact amount of cash that spilled from the armored vehicle.

Officers acknowledged the temptation of picking up cash on the road but were quick to warn the public that keeping the money is still considered theft, and that the money should be returned.

Heeding the police’s warning, some people returned the cash they had picked up from the incident, as per the police department’s Facebook post last Thursday, July 11.

So, believe it or not, some people have been returning the money that fell from the armored car on I-285. We understand it was a bizarre occurrence, but do the right thing and return the money. (RP)

“We understand it was a bizarre occurrence, but do the right thing and return the money,” the police appealed. JB