MANILA, Philippines – Several netizens have reacted negatively to the rape scene aired during the July 15 episode of the long-running television series “Ang Probinsyano,” where two policewomen in uniform were shown being raped by members of a criminal syndicate led by actor Baron Geisler.

The episode showed Geisler, who plays the character of “Bungo,” carrying one of the policewomen to an isolated place in the group’s hideout for a  “honeymoon,” as other criminals chant to the tune of a wedding song.

Two members of the gang, meanwhile, held both hands of the other policewoman, while the other group member sexually abuses her.

This is where operatives of the Philippine National Police – Criminal Investigation and Detection Group and Task Force Agila, whose members include the protagonist Ricardo Dalisay played by Coco Martin, then showed up and busted the group’s hideout.

The action-filled episode most particularly the rape scene, however, did not sit well with some netizens.

Part of the episode was posted on the Facebook page of the show on Monday, where some viewers expressed their concern.

(You have shown too much in your show. I hope you can be more sensitive for the viewers. It is not good to display rape and sexual abuse on women.) 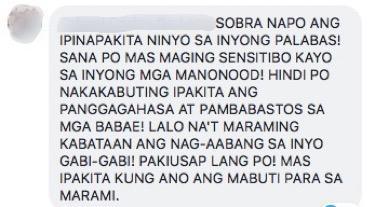 Meanwhile, a woman who seems to be a member of the PNP, also wrote a comment and slammed the show, describing the episode as a “blatant disrespect” to the police uniform.

Other netizens also called out the series for supposedly showing a bad example to young viewers.

Another netizen likewise pointed out that rape is a sensitive issue to be portrayed in a television show.

In its Twitter account, the PNP said it is already looking if there is a violation on the series, especially since the victims in the episode were wearing police uniforms.

We are already looking into this if there is a violation specially the picture depicted in the scene is a police officer wearing PNP uniform and sadly, a "lady" officer.

Currently, the PNP and “Ang Probinsyano” has an existing Memorandum of Understanding to iron out differences between both parties, after PNP chief Gen. Oscar Albayalde slammed its previous portrayal of the PNP chief as a scalawag cop. The PNP had earlier banned the television series from using police assets and personnel back then.

With the MOU signed in November 2018, the PNP had restored its support for the series and allowed the production team to use police uniforms and equipment but with supervision from police officials.

PNP Deputy Spokesperson Lt. Col. Kimberly Molitas said the PNP will look into whether the MOU was violated by the episode. “Depending on the extent of the violation, we may warn them or rescind the said MOU,” she said. / jpv

Read Next
Isko Moreno to barangay execs: ‘Declog creeks to prevent dengue’
EDITORS' PICK
Get exciting deals and discounts when you download the new McDonald’s App
DOH: Second person ‘under investigation’ for 2019-nCoV in Tacloban City
China expands lockdowns to 25M people to halt viral outbreak
5-year-old Chinese boy in Cebu tests negative for novel coronavirus
SM continues to send relief assistance to remote towns in Batangas
‘A greener, cleaner tomorrow’: A how-to guide for Filipinos who want to help with today’s energy crisis
MOST READ
Philippines orders 12 helicopters from Russia—Duterte
Taal Volcano flexes signs of restiveness anew
Dina Bonnevie on Coney Reyes: We have forgiven each other
Locsin rejects blood money for OFW’s death in Kuwait
Don't miss out on the latest news and information.