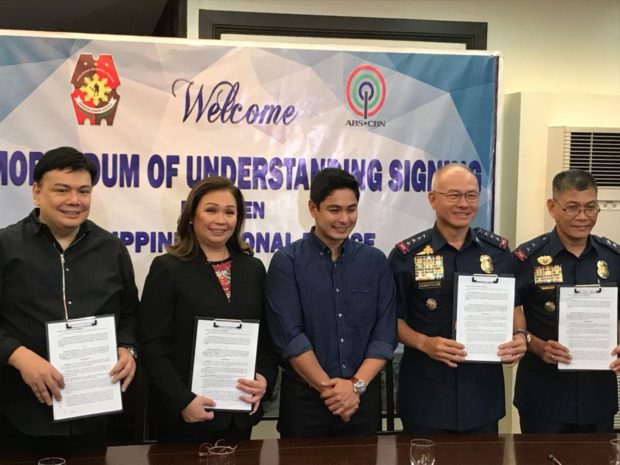 Philippine National Police chief Director General Oscar Albayalde and ABS-CBN executives signed on Monday a Memorandum of Understanding (MOU) to iron out differences between them regarding the television series “Ang Probinsyano.”

Coco Martin, the show’s lead actor, was present at the MOU signing.

Albayalde said that under the MOU, the PNP would be restoring its support for the series by allowing its production team to use police uniforms, equipment, and facilities but with supervision from the PNP.

“Parang consultative ang dating (It will appear as consultative),” he said, citing that the supervision would cover interventions on the way the characters wear the uniform and their posture as police officers.

But he said the MOU also provides that the producers of the show should make the story of the hit television series more “realistic.”

“Hindi naman natin sinabi na ang ilalabas puro [good things about the PNP, but] what’s reality basically, for the story to be more realistic lang. Pero not necessarily palaging favor sa PNP,” he said, noting that the PNP is not a flawless government agency.

(We did not say they should always show what’s good about the PNP, but what’s reality basically, for the story to be more realistic. It’s not necessarily making them always show what favors PNP.)

He said “changes” on the show would most likely be seen in the next episodes of the series.

The signing came a week after a meeting between officials of the PNP, the Department of the Interior and Local Government and ABS-CBN to address the concerns of the government agencies about the teleserye.

Earlier, Albayalde criticized the series for supposedly putting the police force in a bad light.

“Ang Probinsyano” currently portrays the PNP chief as a scalawag, while Ricardo Dalisay played by Martin is a policeman who has joined the rebel group “Vendetta.” /cbb

Brad Pitt clarifies he’s not on Tinder, says he’s ‘not even sure how it all works’