Hong Kong leader thanks police after clashes with ‘rioters’ 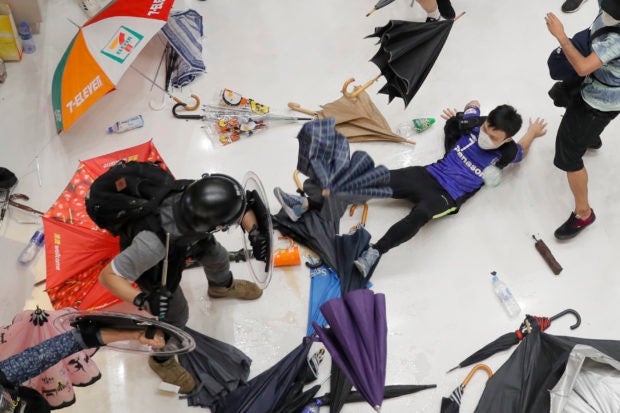 In this Sunday, July 14, 2019, photo, policemen scuffle with protesters inside a shopping mall in Sha Tin District in Hong Kong. Police in Hong Kong have fought with protesters as they broke up a demonstration by thousands of people demanding the resignation of the Chinese territory’s chief executive and an investigation into complaints of police violence. (AP Photo/Kin Cheung)

A demonstration Sunday in Hong Kong’s Sha Tin district was peaceful for most of the day, but fights broke out when police started clearing streets after nightfall.

Some protesters retreated into a shopping complex where they and police hit each other with clubs and umbrellas.

Lam paid a hospital visit to police officers who were injured and expressed gratitude to them for safeguarding law and order in Hong Kong.

“They are committed, professional and have exercised restraint when they were being attacked by those whom I describe as ‘rioters,'” she told reporters.

Large-scale protests began in Hong Kong last month in opposition to proposed extradition legislation that would allow people in Hong Kong to be sent for trials in mainland China, where critics say their legal rights would not be guaranteed.

In response to a series of massive demonstrations calling for the bills’ withdrawal, Lam said the legislation was “dead.” But thousands have continued to take to the streets to call for greater government accountability and democratic reforms.

While largely peaceful, the protests have at times devolved into clashes between protesters and police, who have used pepper spray, bean bag rounds, rubber bullets and tear gas to quell demonstrators.

The protesters are in turn calling for police to be held responsible for their tactics. Activists have also accused Lam of ignoring public sentiment and called on her to resign.

“Although I am currently encountering a huge difficulty, I have publicly stressed many times that I will continue to still bear my responsibility and have the passion for continuing my job until the end of my term,” Lam said Monday.

Both pro-democracy legislators and ones who support China’s Communist Party-led central government held news conferences on Monday to address the clashes.

“Both sides have to come out and establish communication channels,” said pro-Beijing lawmaker Starry Lee.

“I think (Lam) and also the bureau responsible should come out and respond to this issue,” Lee said. “Otherwise Hong Kong will be the loser and no Hong Kong person wants to see this happen again and again.”

Pro-democracy legislator Claudia Mo described the current tumult as “the biggest political and governance crisis Hong Kong has ever faced.”

“The whole of Hong Kong found it difficult to cope,” Mo said. “We urge once again Carrie Lam to come out and face the people.” /gsg

Read Next
Protests spark over construction of telescope in Hawaii
EDITORS' PICK
PH tops ‘Women in Business’ global ranking
The fight of the decade: The Gypsy King vs The Bronze Bomber
Mallorca City: Home of Cavite’s finest industrial hub
PH envoy says China sanctions ‘likely’ on Pogo workers
Tokyo 2020 postpones volunteer training over virus fears
‘It’s time for young people to find their own yellow ribbon’
MOST READ
Honda to shut down Laguna plant
Murder charges filed vs Sandra Cam
Vice President Robredo’s mother passes away at 83
It was DILG that blamed Estrada for Manila’s failure to pass standards – Isko Moreno
Don't miss out on the latest news and information.