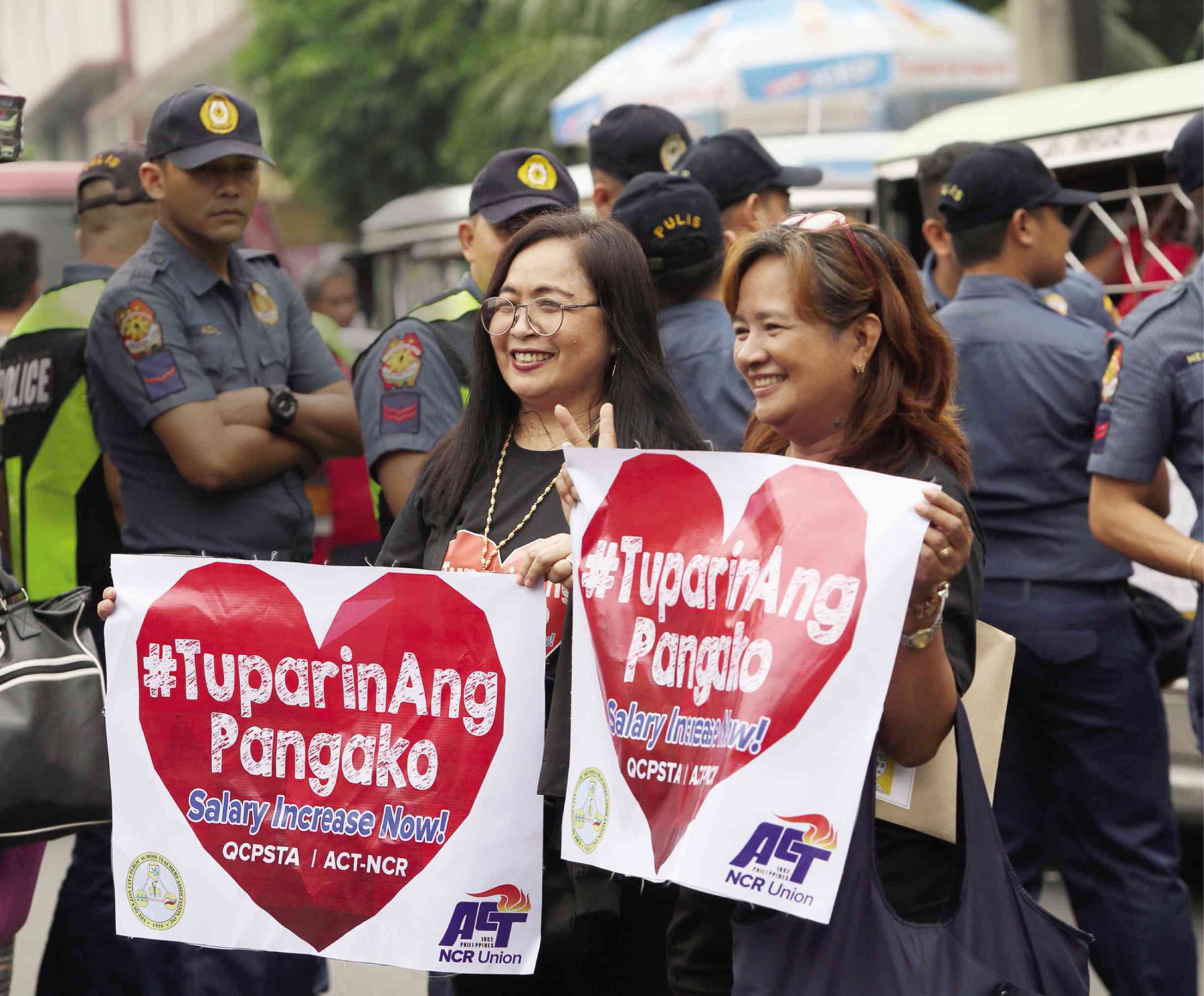 PROMISE TO KEEP Members of the Alliance of Concerned Teachers challenge President Duterte to make good on his campaign promise to raise teachers’ pay during Monday’s protest rally on Mendiola, Manila. —MARIANNE BERMUDEZ

MANILA, Philippines —  A week before President Rodrigo Duterte’s fourth State of the Nation Address (Sona), more than 200 teachers’ groups filed a resolution on Monday in Malacañang, urging him to finally back up his longtime pledge to increase their salaries.

“No more promises,” said Joselyn Martinez, chair of the Alliance of Concerned Teachers (ACT). “What we need now is a concrete and decisive move to raise our salaries.”

The resolution — signed by 202 public school faculty clubs throughout the country — was filed in the Office of the President (OP).

It was the latest of several moves that teachers’ organizations had taken in a seemingly endless bid to keep a spotlight on the issue.

‘Soft spot in your heart’

In April, nine teachers’ federations also trooped to the OP to file a letter asking the President, the son of a public school teacher, to tap into the “soft spot in your heart” for those in the vocation.

The President has promised to raise teachers’ pay since 2015, when word got around that he might run for the country’s top post. He has repeated the promise nearly 10 times since assuming office, but has sent mixed signals about how much or when it would happen.

“The economic crisis and steep inflation rates have rendered the recent salary adjustments meaningless and ineffective in improving the quality of life of the overwhelming majority of government employees,” read the resolution submitted by the teachers on Monday.

It ended with their longtime demand that entry-level teachers be given a salary of P30,000 from the current P20,754, while Salary Grade 1 employees be provided a wage of P16,000.

“Effecting the salary increase is about giving justice to the overwhelming majority of government workers who have committed their [lives] to serving the Filipino people with hardly any recognition,” Martinez said. “We and our families deserve a decent life, too.”

The teachers also submitted the resolution to the Department of Budget and Management, which earlier raised concerns about how it would fund a pay hike for teachers, the largest segment of the government bureaucracy.

“A week from now, Duterte will again address the Filipino people in his Sona. We will be waiting to hear his response to our just demands,” Martinez said.

The teachers held a protest at Mendiola in Manila after filing the resolution.

Carrying a large tarpaulin that bore the interface of a smartphone calendar, teachers culminated the demonstration by marking July 22 as the President’s “day of reckoning” according to the ACT.

They have repeatedly asked the President and Department of Education officials to engage them in a dialogue on salary increases, but their calls seem to have fallen on deaf ears.

This is the final year that teachers will receive a small pay hike under former President Benigno Aquino III’s Executive Order No. 201, which has granted them about P500 every year since 2015.