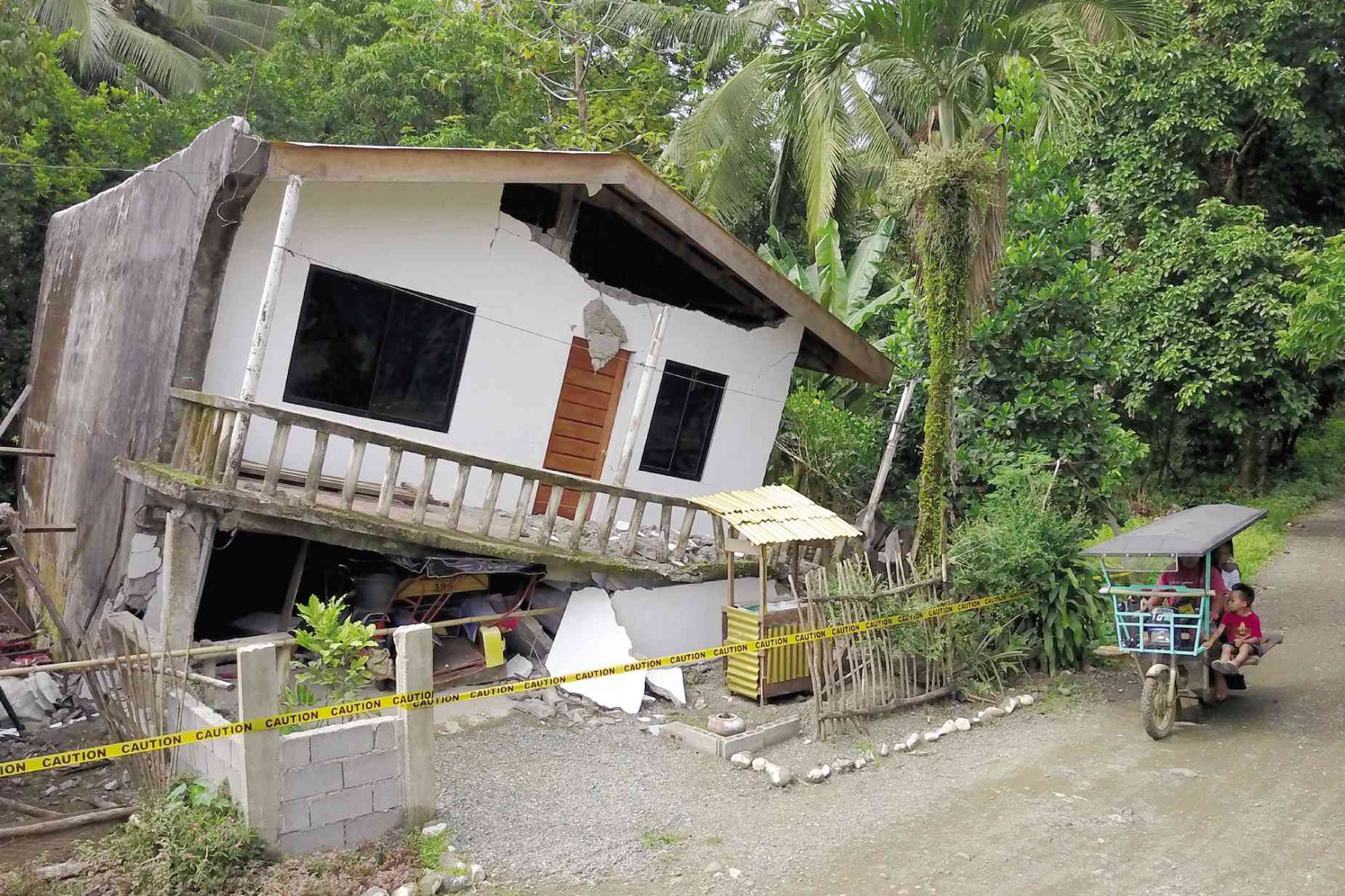 NOBODY HOME The owners of this house in Barangay Esperanza in Carmen town, Surigao del Sur, are forced to seek shelter elsewhere after the structure was damaged when a strong earthquake hit the province on Saturday. —ERWIN MASCARIÑAS

MADRID, Surigao del Sur, Philippines — The Office of Civil Defense (OCD) in the Caraga region has asked local governments to ensure the safety of families affected by the 5.5-magnitude earthquake on Saturday by keeping them out of their damaged houses.

Liza Mazo, OCD Caraga director, said she had been receiving reports that residents were not leaving their damaged houses because they had no place to stay, a practice, she noted, that was not safe.

“The fact that there is a crack, or the walls and other parts of the house had collapsed, it is not safe to stay [there]. It is dangerous for them to stay and spend the night in those houses as aftershocks continue to hit the area,” she said.

She ordered officials of local disaster risk reduction and management offices to facilitate the transfer of affected residents to safer areas.

The Regional Disaster Risk Reduction and Management Council said 314 houses were damaged by the quake, based on reports from the towns of Carmen (240) and Carrascal (74) in Surigao del Sur province.

In Cantilan town, many families use tarpaulin sheets as temporary replacement to collapsed concrete walls of their houses.

In Barangay Bayogo in Madrid town, family members cleared the debris of their collapsed house to rebuild a makeshift shelter from what remained of the old structure.

Mazo said aftershocks from Saturday’s tremor would further weaken the structures, hence exposing the affected families to more danger. As of Monday, the Philippine Institute of Volcanology and Seismology (Phivolcs) recorded nine aftershocks. 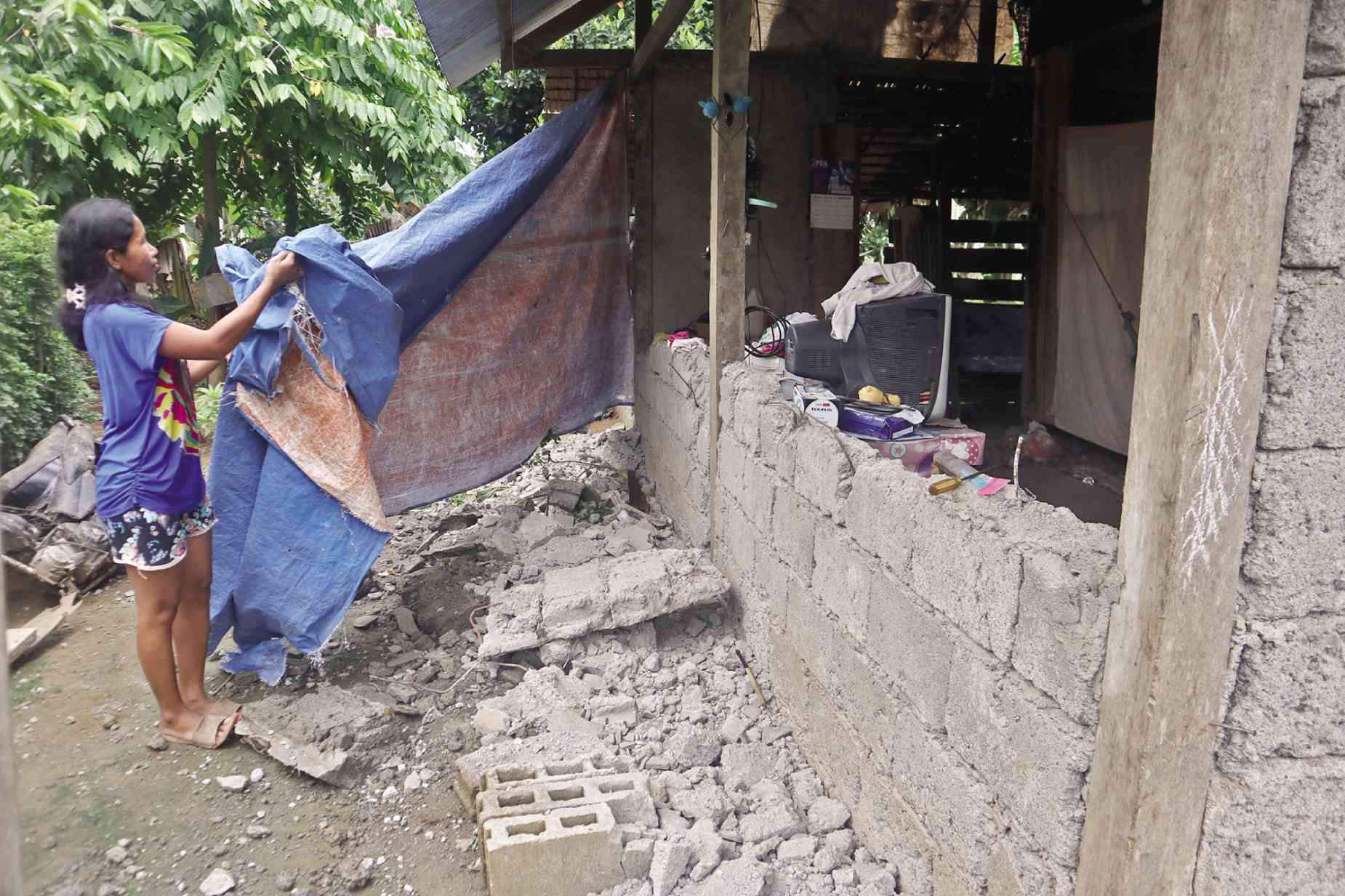 WALL REPLACEMENT In Cantilan town, a woman uses a tarpaulin sheet to cover a collapsed section of a wall in her house. —ERWIN MASCARIÑAS

“There is no place for complacency at a time like this. As long as aftershocks continue to cause tremors in the area, these families should be asked to stay out of makeshift tents,” Mazo said.

In Davao del Sur, an official of the Department Science and Technology (DOST) said structures in urban areas in the province’s capital city of Digos were at risk to earthquake-related damage because of the area’s soft soil.

Vicente Dagangon, DOST provincial director, said this geophysical description of the city came from Phivolcs and was presented to provincial officials on July 2, a week before a 5.6-magnitude earthquake hit Makilala, Cotabato.

He said Digos was part of the Metro Davao Earthquake Model study by Phivolcs. Soil sampling done under the study showed that Digos was vulnerable to tremors, he added.

Dagangon asked local officials to ensure that all buildings and structures in the city would be constructed in accordance with the standards set by the National Building Code. —With a report from Eldie Aguirre