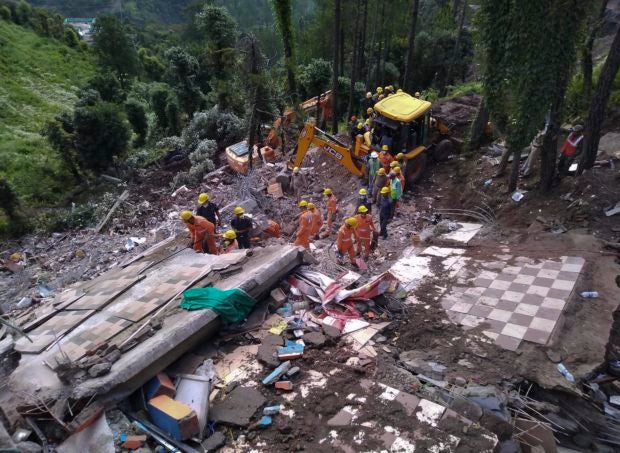 Rescuers of India’s National Disaster Response Force (NDRF) look for survivors after a three-story building collapsed in monsoon rains near the town of Solan, a hilly area 310 kilometers (195 miles) north of New Delhi, India, Monday, July 15, 2019. Rescuers were looking for half a dozen people, including some soldiers, still unaccounted for following Sunday’s collapse. (AP Photo)

NEW DELHI — Eleven soldiers were among a dozen bodies recovered from the debris of a three-story building that collapsed after monsoon rains hit a hilly area of northern India, officials said Monday.

Rescuers were looking for two to three people still unaccounted after Sunday’s collapse, said Gaurav Srivastav, an official from the National Disaster Response Force, or NDRF.

Fire official Raja Ram Bhagate said the dead included 11 army soldiers who were having a party in a ground floor restaurant in the building when it collapsed. One civilian also was killed.

Several soldiers were among the 31 people rescued after the collapse occurred in Solan, a town in Himachal Pradesh state. The area is 310 kilometers (195 miles) north of New Delhi.

More than 70 NDRF rescuers and 40 fire officers have been clearing the rubble, using earthmovers, drillers, and gas cutters.

The building shook and collapsed in no time, the Press Trust of India news agency, or PTI, quoted an injured soldier as saying.

Another injured person, Rakesh Kumar, said dozens of soldiers and other customers were in the building, along with restaurant workers.

“We thought it was a quake and did not know how the building collapsed. We were trapped under the debris. I remained trapped for about 10-15 minutes before some people rescued me,” PTI quoted Kumar as saying.

Building collapses are common in India during the June-September monsoon season, when heavy rains weaken the foundations of structures that are poorly constructed. /kga