MANILA, Philippines — Manila’s traffic enforcement unit has collared a jeepney driver for allegedly cutting trips in the city, and served as a warning that the local government is serious in its drive to bring order in the streets of the nation’s capital.

Manila Mayor Isko Moreno presented jeepney driver Willy Bajinding to the media at the Manila City Hall on Monday. He said Bajinding was caught cutting trips and even defied authorities in violation if Republic Act 4136 or Resistance and Disobedience, and Alarms and Scandal.

“Ito po ay isa sa naaresto na nagka-cutting trip. He [also] resisted and disobeyed a person in authority and that is a violation of R.A. 4136,” Moreno said in a press conference.

“I hope this will be… a gentle reminder to every driver that we are very serious about this thing in putting an order in the streets of Manila,” he added.

Even before he officially assumed office on July 1, Moreno had earlier issued a stern warning against erring public utility vehicle drivers. 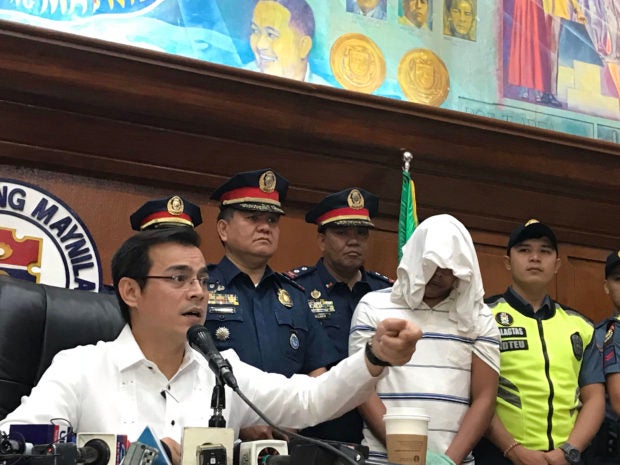 Manila Mayor Isko Moreno and members of the city’s traffic enforcement unit present to the media on Monday, July 15, 2019, a jeepney driver caught cutting his trips in the city. Moreno has earlier warned drivers engaged in “trip-cutting” that they risk losing their franchise if they continue doing such illegal routine in Manila. Photo by Christia Marie Ramos/INQUIRER.net

READ: Isko bares fangs at drivers: No cutting trip, or else…

He threatened drivers cutting trips that they stand to lose their franchise if they continue doing such illegal practice.

In the same press briefing, Moreno also presented arrested suspects who are allegedly among Manila’s most wanted.

READ: Cops arrest some of Manila’s most wanted suspects

Two alleged rapists and an extortionist preying on street vendors have been collared by lawmen recently, according to Moreno.