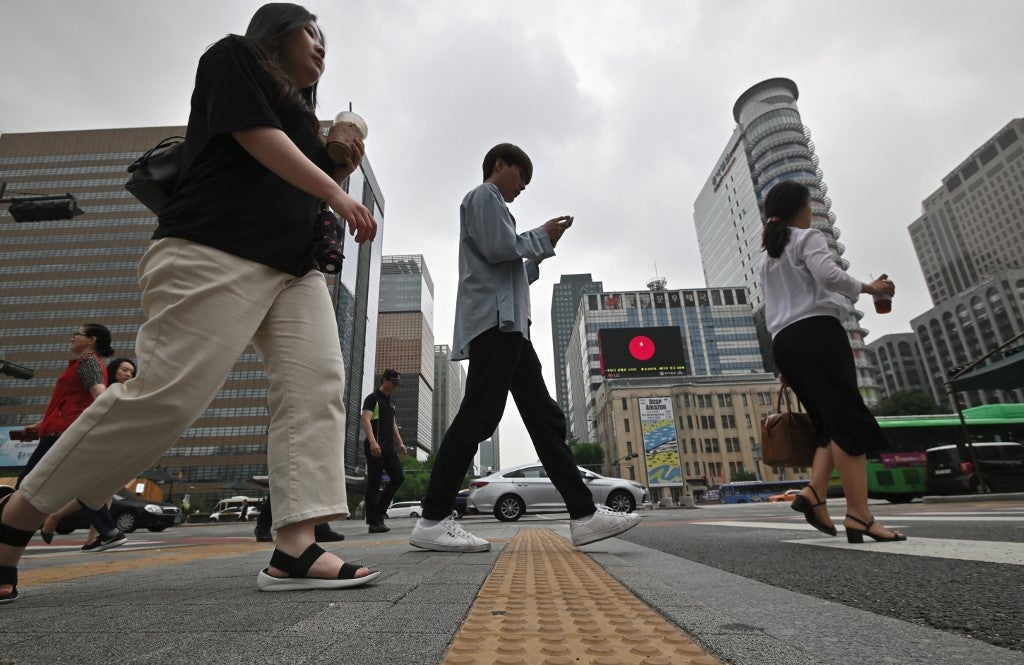 People walk cross a road at a business district in Seoul on July 15, 2019. – New legislation that comes into effect on July 16 will criminalize business owners who unfairly dismiss employees harassed at work in South Korea.  (Photo by Jung Yeon-je / AFP)

SEOUL, South Korea — After enduring months of constant harassment at work, South Korean office worker Christine Jung finally confronted her aggressor — only to be fired and sued for defamation by her employer.

Her situation is not unusual in South Korea, where employees have traditionally been expected to turn a blind eye to abusive behaviour by those in power — a phenomenon so commonplace that locals have coined a word for it, “gabjil”. But that could soon change thanks to a revised labour law.

The new legislation that comes into effect on Tuesday will criminalize business owners who unfairly dismiss employees harassed at work.

A recent government survey found that two-thirds of workers had experienced harassment on the job, while 80 percent had witnessed it.

In one of the most high-profile cases, an heiress to the Korean Air fortune threw a temper tantrum at cabin crew after being served nuts in a bag instead of a bowl in 2014 — earning instant “nut rage” notoriety.

Rigid company hierarchies, intense competition for jobs and deference to status all contribute to toxic work environments in an economy dominated by family-run conglomerates.

In Jung’s case, her harasser was the CEO’s father.

“He once told me the building was shaking whenever I walked — because I was ‘too fat’. Another time he tried to follow me to the women’s bathroom. And another time he abruptly groped my stomach in his office,” the 37-year-old told AFP.

“But when I brought up the issue, the management accused me of being a man-hater and a liar.”

Jung finally approached the labour ministry last year, but was told her situation did not count as workplace bullying because the aggressor was not her superior and was not employed by the company, even though he came to the office “virtually every day”, she said.

The new law will subject owners of companies that “unfairly demote or dismiss” workers who allege harassment to three years imprisonment or a fine of up to 30 million won ($25,000).

Employees ordered to write essays for their manager’s children, perform “sexy dances” for executives or even pluck out their boss’s grey hairs are among the examples documented by labour rights group Workplace Gabjil 119 and other non-profits.

Violent behaviour has also been reported. In 2016, a university professor was jailed for abusing his former student and employee, beating him with a baseball bat for taking short breaks and forcing him to eat human faeces.

Nursing is notorious for its harsh training and so-called “burn-to-ashes” brutal work culture, with two recent suicides sparking debate about the sector.

And after the South Korean women’s curling team, nicknamed the “Garlic Girls”, stole the show at last year’s Winter Olympics, they too raised allegations of abuse and exploitation by their coaches.

The issue is present in almost every sector, from K-pop and film to healthcare and academia. But with a weak social safety net and rising unemployment, it is often hard for victims to speak up, as they fear losing their jobs or being demoted.

When one victim complained to his company’s management about bullying, he was told: “Then just leave. Can you actually find a job elsewhere? Oh, perhaps at McDonald’s?”

Park Jeom-gyu, an activist at Workplace Gabjil 119, told AFP that even with the new law the South “still has a long way to go, since it does not directly criminalize the bullies”, only employers who penalize victims for speaking out.

“But it’s still a meaningful step towards change, as more will feel relatively safer to report when they face harassment at work,” he said.

Michael Hurt, a sociologist at the University of Seoul, says the obsession with hierarchy is a legacy of the wartime militarism of former colonial ruler Japan, later adopted by the South’s authoritarian leaders.

In this power structure, “gabjil in the workplace is a way to prove to oneself and others his or her social worth,” he told AFP.

For many Korean workers, including Jung, the new measures have come too late.

Instead of receiving an apology from the perpetrator, she was fired by the CEO who later sued her for defamation and libel.

The cases were never brought to trial, but Jung said the disputes at one point made her suicidal.

“Those at my ex-employer didn’t treat me like a human being — it was as if I were one of their disposable commodities.”