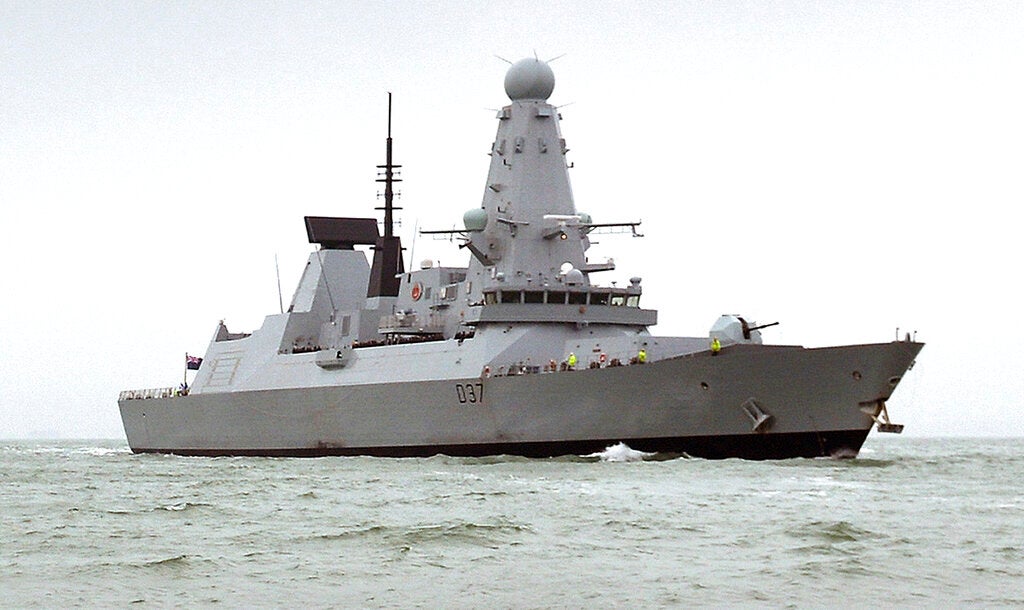 DUBAI, United Arab Emirates  — Britain will facilitate the release of a seized Iranian tanker if Iran can provide guarantees the vessel would not breach European sanctions on oil shipments to Syria, Britain’s top diplomat said, as European nations called for new talks to ease tensions in the Persian Gulf.

The comments by Foreign Secretary Jeremy Hunt late Saturday could help de-escalate tensions that have spiked in recent days. In apparent retaliation for the seized tanker, Iranian paramilitary vessels tried to impede the passage of a British oil tanker through the Strait of Hormuz, only turning away after receiving “verbal warnings” from a British navy vessel accompanying the ship, the British government said.

This undated Ministry of Defence handout shows the HMS Duncan, a Type 45 Destroyer, which will relieve HMS Montrose in the region as Iran threatens to disrupt shipping. Iran on Friday, July 12, 2019 demanded the British navy release an Iranian oil tanker seized last week off Gibraltar, accusing London of playing a “dangerous game” and threatening retribution. British media reported a second warship, the destroyer HMS Duncan, was being sent to the Persian Gulf to operate alongside the Royal Navy’s HMS Montrose frigate and American forces, and would be there in a few days. The British Ministry of Defense refused to comment. (Ben Sutton/Ministry of Defence via AP)

Hunt said he held a “constructive call” with Iran’s Foreign Minister Mohammed Javad Zarif and reassured him “our concern was the destination, not the origin, of the oil.” Hunt wrote that Zarif told him Iran is not seeking to escalate.

The Foreign Office elaborated in a statement, saying: “This was about the enforcement of EU Syria sanctions: action was taken because of where the oil was going — a sanctioned Syrian entity — not because it was from Iran.”

On Sunday the leaders of Britain, France and Germany called for an end to “the escalation of tensions” in the region, which come a year after President Donald Trump pulled the U.S. out of Iran’s nuclear deal with world powers.

Prime Minister Theresa May, President Emmanuel Macron and Chancellor Angela Merkel said they were “deeply troubled by the attacks we have witnessed in the Persian Gulf and beyond, and by the deterioration of the security in the region.”

They called for talks to end the standoff and “signs of goodwill” from all sides.

Ali Rabiei, an Iranian government spokesman, said British authorities would release the ship because “the tanker’s destination was not what the British announced,” according to state TV. Iranian officials had earlier denied the ship was bound for Syria.

A day earlier, Iran had reiterated its demands that the British navy release the tanker, accusing London of playing a “dangerous game” and threatening retribution.

The tanker’s interception came on the heels of already high tensions in the Persian Gulf as the Trump administration continues its campaign of maximum pressure on Iran.

Since pulling out of the nuclear deal, Trump has re-imposed harsh sanctions on Tehran’s oil exports, exacerbating an economic crisis that has sent its currency plummeting.

The U.S. has also sent thousands of troops, an aircraft carrier, nuclear-capable B-52 bombers and advanced fighter jets to the Middle East in recent weeks.

Iran recently begun surpassing uranium enrichment limits set in its 2015 nuclear deal, saying these moves can be reversed if the other parties to the agreement — Germany, France, Britain, China, Russia and the European Union — come up with enough economic incentives to effectively offset the U.S. sanctions.

The Iranian supertanker, carrying 2.1 million barrels of light crude oil, was seized with the help of British Royal Marines earlier this month off Gibraltar, a British overseas territory at the southern tip of Spain.

Hunt told reporters on Saturday that he told Zarif if the U.K. could receive sufficient guarantees that that tanker was not headed for Syria “then we would be able to resolve the situation following of course, due process in the Gibraltar courts.”

In recent days, Hunt has called for “cool heads” to prevail to ensure there is no “unintended escalation.”

Police in Gibraltar said Friday they arrested four crewmen of the Iranian ship, including its captain and chief officer. All are Indian nationals.

A senior Spanish official had said the interception was carried out at the request of the United States, but later Gibraltar’s Chief Minister Fabian Picardo told parliament no other government had asked the territory to act.