BENI, Congo – The Congolese health ministry confirmed an Ebola case in Goma late Sunday, marking the first time the virus has reached the city of more than 2 million people along the border with Rwanda since the epidemic began nearly a year ago. 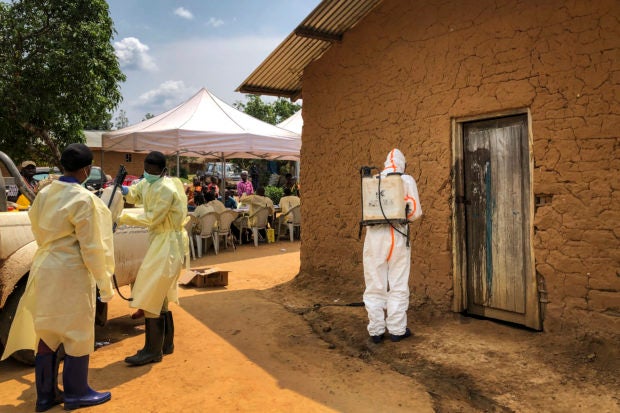 A worker from the World Health Organization (WHO) decontaminates the doorway of a house on a plot where two cases of Ebola were found, in the village of Mabalako, in eastern Congo Monday, June 17, 2019. Health officials in eastern Congo have begun offering vaccinations to all residents in the hotspot of Mabalako whereas previous efforts had only targeted known contacts or those considered to be at high risk. (AP Photo/Al-hadji Kudra Maliro)

The health ministry said the man who had arrived earlier Sunday in the regional capital had been quickly transported to an Ebola treatment center.

Authorities said they had tracked down all the passengers on the bus the man took to Goma from Butembo, one of the towns hardest hit by the disease.

“Because of the speed with which the patient was identified and isolated, and the identification of all the other bus passengers coming from Butembo, the risk of it spreading in the rest of the city of Goma is small,” the health ministry said in a statement.

The virus has killed more than 1,600 people in Congo and two others who returned home across the border to neighboring Uganda.

Health experts have long feared that it could make its way to Goma, which is located on the Rwandan border.

The health ministries in Congo’s neighbors have been preparing for months for the possibility of cases, and frontline health workers already have been vaccinated.

The confirmed case announced late Sunday in eastern Congo involves a pastor who became ill last Tuesday. He then left Butembo on a bus, and arrived at a health center Sunday showing symptoms of Ebola, the health ministry said.

Violent attacks against health workers and treatment facilities have greatly compromised efforts to combat the epidemic in Butembo.

Eastern Congo is home to a myriad of armed groups, and Mai Mai militia fighters are active near the hardest hit towns. Health teams have been unable to access violent areas to vaccinate people at risk of infection and to bring infected patients into isolation.

Other times the violence against health teams has come from residents who do not want their loved ones taken to treatment centers or buried in accordance with guidelines aimed at reducing Ebola transmission.

While the experimental vaccine is believed to have saved countless lives, not all Congolese people have accepted it. Some falsely believe that the vaccine is what is making people sick, in part because people can still develop the disease after getting the shot if they already had been infected. /gsg