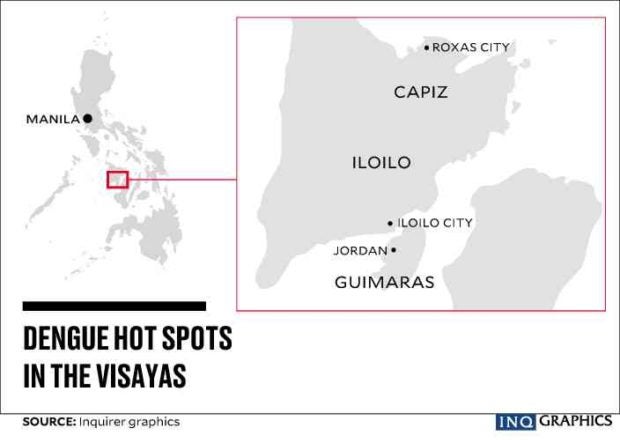 ILOILO CITY, Iloilo, Philippines — The Iloilo provincial government has sought the assistance of private hospitals in treating dengue patients amid the surge of cases of the mosquito-borne disease in government-run hospitals in the province.

The provinces of Capiz and Guimaras on Friday had separately declared dengue outbreaks following the health alert raised by Iloilo province.

As of July 12, 1,863 patients, including 851 dengue patients, were confined in 12 provincial and district hospitals. The number is more than triple the total 615-bed capacity of these hospitals.

The 25-bed Jesus M. Colmenares District Hospital in Balasan town, Iloilo, has 285 confined patients, 181 of which are dengue cases.

In many hospitals, patients are forced to use folding beds set up along hallways. Many of these folding beds have been donated by private groups and individual donors to local hospitals.

Private rooms were also transformed into wards as the number of dengue patients increased.

Capiz Gov. Esteban Evan Contreras on Friday declared a dengue outbreak in the province as cases from January to June 29 reached 2,177, with 14 deaths.

The number of cases was higher by 771 percent compared to the 250 cases reported during the same period last year.

Dengue, which has no known cure and can be fatal, is a mosquito-borne infection transmitted by the Aedes aegypti mosquito.

To contain the disease, the Department of Health has urged the public to search and destroy breeding sites of mosquitoes, employ self-protection measures, seek early consultation, and support fogging and spraying in hot spot areas.

“The rains have come and it only takes about two weeks for mosquitoes to breed and fully mature into dengue-causing mosquitoes,” Health Secretary Francisco Duque III said in a statement. —With a report from Tina Santos