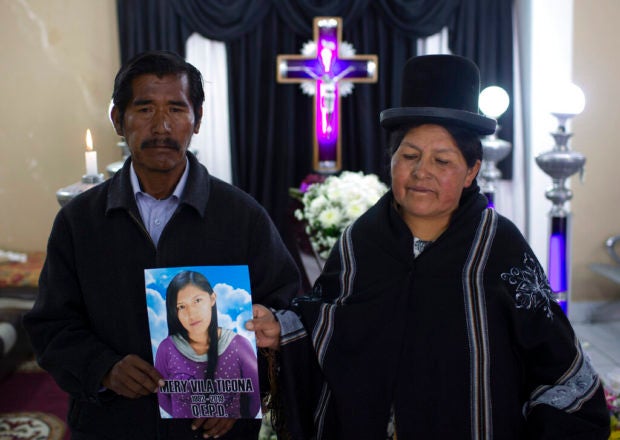 Celso Vila and Luisa Ticona pose with a photo of their late daughter Mery Vila, one of 69 femicides reported in Bolivia since January, the highest in six years in the same period. Image: AP Photo/Juan Karita

LA PAZ, Bolivia — Grief-struck family members followed Mery Vila’s coffin outside the “Stairway to Heaven” funeral home in the Bolivian capital and angrily shouted: “Justice!” over and over again.

Her mother, Luisa Ticona, said Vila’s partner killed the 26-year-old woman by striking her several times on the head with a hammer.

“He was drunk and destroyed her head,” said Ticona, who will now help take care of the slain woman’s 9-year-old son. Police said the partner has been detained.

The death of Vila this week is one of 73 femicides reported in Bolivia since January, the highest toll in six years for the same period.

The alarming number in a country of 11 million people that already had South America’s highest rate of femicides prompted Bolivia’s Women’s Affairs Commission to convene an emergency meeting Friday to demand officials allocate more resources for the fight against gender-based violence.

Waves of women have mobilized recently to fight gender violence across the world. In neighboring Argentina, a grassroots movement known as “Ni Una Menos,” or Not One Less, emerged in 2015 and drew thousands to massive demonstrations in support of women’s rights.

Movements in Bolivia have lacked the impact of Ni Una Menos or the #MeToo movement in the United States, but Bolivian women have staged demonstrations and organized theater productions to raise awareness.

Authorities have said that 65 women died in the January-June period. That’s the highest since 2013, when Bolivia declared the eradication of violence against women to be a government priority and included the crime of femicide into the penal code with prison terms.

“As of this week, 73 cases of femicides have been registered, most in vulnerable sector. This is lamentable,” said Bolivian Attorney General Juan Lanchipa, including July deaths.

The level of impunity is also high, with only an estimated 15 percent of all cases get a conviction.

Tania Sánchez, director of the Justice Ministry’s Plurinational Service for Women and De-Patriarchalization, said the rise in gender-based violence in Bolivia is a reflection of a country that continues to resist change and “accept that men and women can have the same rights.”

Bolivia had two femicides for every 100,000 women, according to a 2018 report by the United Nations’ Economic Commission for Latin America and the Caribbean.

About half of all reports of gender-based violence in Bolivia take place in indigenous communities, according to 2017 figures from the National Statistics Institute. Those communities make up roughly a fifth of the Andean country’s population. About 40% of Bolivia’s police cases involve family violence and alcohol is involved in 90% of cases, according to a government report last year on gender-based violence. NVG