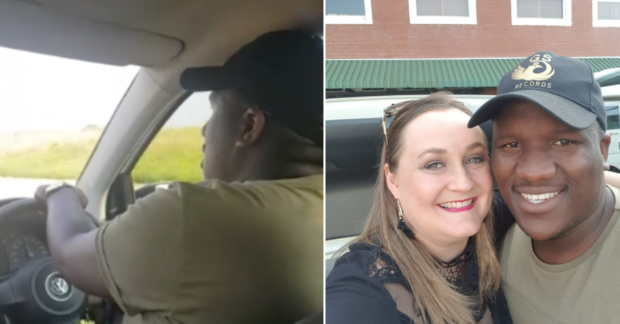 Uber driver Menzi Mngoma found the chance to pursue his music career with the help of his passenger Kim Davey. Image: Facebook/@kim.davey.520

An Uber driver from South Africa appears to be en route to fulfilling his dream to be an international singer, after a passenger recorded and shared a video of him last May singing during their trip.

Menzi Mngoma, 27, had to give up his passion for opera so he could earn a living as the breadwinner of his family. A self-taught opera singer and a musicology graduate, he lives in Durban, a city on the east coast of the country.

One of the reasons he thought of becoming a driver was to get a chance to find connections to share his talent, NPR reported on Saturday, July 13. Opportunity came when he booked Kim Davey on May 23. During the ride with Davey, she found out his penchant for opera and asked him to sing.

She posted his video on Facebook, and Mngoma’s powerful voice has since racked up 696,000 views as of writing. Davey appealed to agents to help Mngoma’s dreams come true, given that he has had no opportunities in the country for his musical talent.

****UPDATE*** Please pledge your support for his trip to iPOP! here on this…

Local press quickly picked up his story and have helped put his dreams to motion. He received a donation worth R5,000 (over P18,000) from radio show “Breakfast with Martin Bester”. He also got connected with a musician through East Coast Radio to produce and release a single, as per the South African Jewish Report on June 27. The single “Feel the Love”, released on July 5, is not an opera song, but is still a step in his music career.

Power of music and friendship

More impressive than his vocals is the bond Mngoma has found with his passenger. He and Davey have been talking daily and have had a few reunions, one of which was on Friday, July 12. When he was on East Coast Radio to promote his single, she paid a surprise visit and both of them shared a tight embrace.

Davey regularly updates her Facebook to promote his shows — he has been invited to perform in events such as private functions and a gala concert. It is also with her help that Mngoma is able to find sponsors to pay for travel or accommodations in shows outside of his city.

Mngoma has not given up his day job just yet, but up next is a chance to go to Hollywood. He has been chosen to attend the International Presentation of Performers (iPOP!) in Los Angeles, a convention in December which will connect him to international agents. The amount of R150,000 (almost P550,000) is being crowdfunded for his flights, visa, passport, new clothes and money to support his family while he is away. JB

Read Next
New statues, education center honor Neil Armstrong in Ohio
EDITORS' PICK
SWS: Over 12M Filipinos still jobless as of May 2021
Dizon: 40 of 119 ‘Build’ projects done by 2022
Smart celebrates all kinds of ‘#SimplyLove’ for Pride Month
Spread of Delta variant ‘prevented’ –expert
Smart brings KCON:TACT especially 4U to subscribers from June 19 to 27
SANTIS Delicatessen: The road to survival is sweet and savory
MOST READ
William Martinez sometimes feels his kids ‘don’t remember’ him anymore
Landmark tale of corruption
ICC case vs Duterte may take 3 months in pretrial body
Dizon: 40 of 119 ‘Build’ projects done by 2022
Don't miss out on the latest news and information.