MANILA, Philippines—Human-rights lawyer Chel Diokno on Friday asked the government to cooperate with the United Nations Human Rights Council (UNHRC) in the investigation into the alleged extrajudicial killings under the administration’s war on drugs.

Diokno said the Philippines, as a UN state member, should respect the body’s authority and veer away from interfering in the drug war investigation. 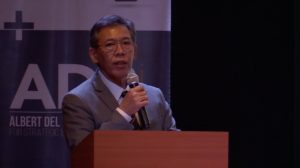 During its 41st session in Geneva, 18 of the 47-member states that make up the human-rights body voted in favor of the draft resolution filed by Iceland on behalf of more than two dozen nations which formally asked Human Rights Michelle Bachelet to prepare and present a “comprehensive written report” on the human-rights situation in the Philippines.

Moments before UN member states vote, President Rodrigo Duterte, who has been harshly criticized for his brutal war on drugs, said he will have to study first whether he will allow UN investigators enter the Philippines.

READ: Duterte to study whether to allow UN probers in PH

Duterte’s drug war has been criticized for its supposed human rights violations. Since it was enforced in 2016, some 6,600 drug personalities have been killed in anti-drug operations, government tally said. /jpv