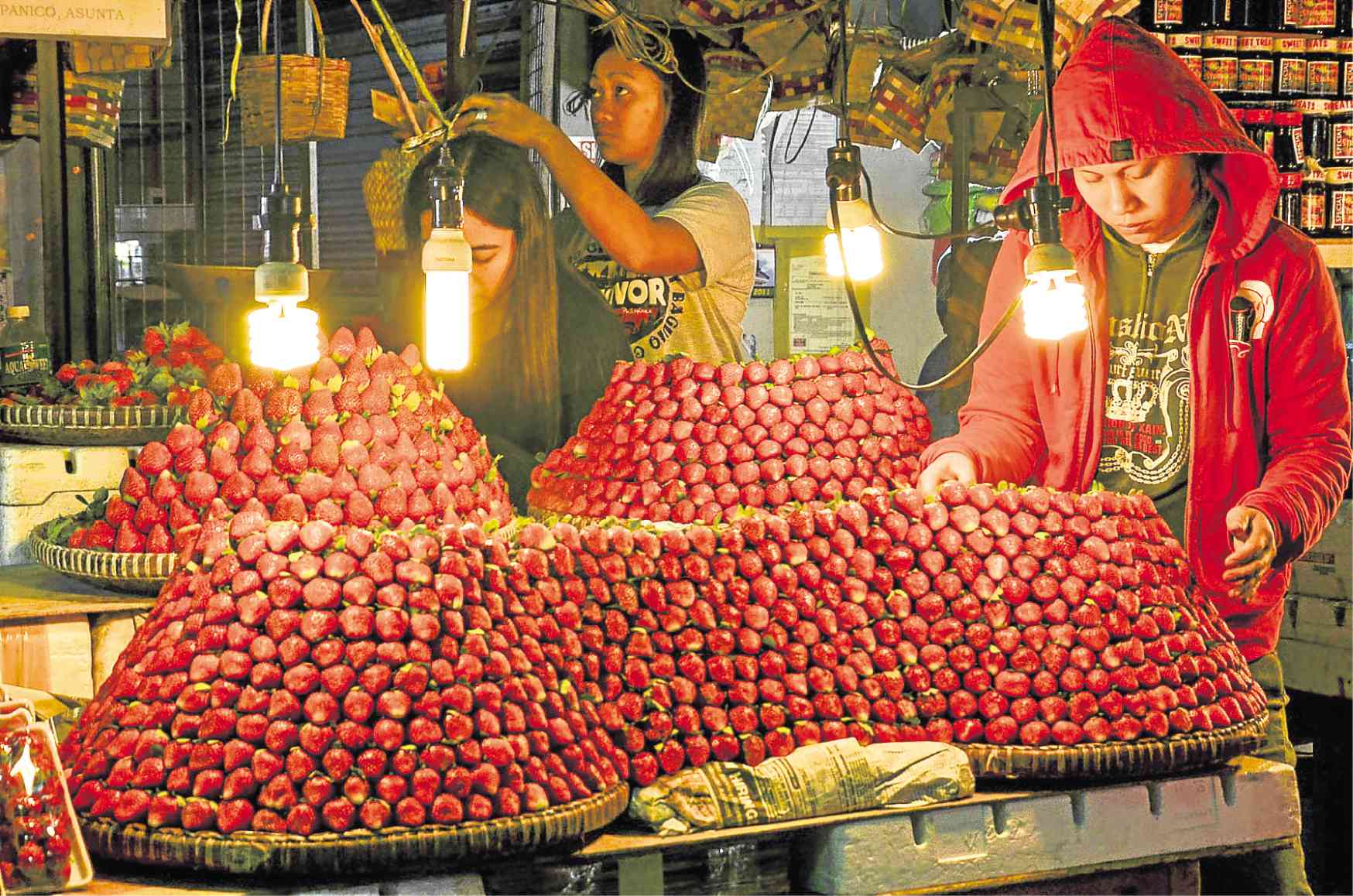 FAVORITE Strawberries grown in farms in La Trinidad, Benguet, are among the favorite “pasalubong” (gift) items at the Baguio City market. —KARLSTON LAPNITEN

LA TRINIDAD, BENGUET — Strawberry production has slowed down this year as farmers shifted to fast-growing crops due to lack of planting materials for the homegrown fruit, the municipal agriculture office said on Thursday.

Of the 65 hectares dedicated to strawberry production in this capital town, only 30 ha have been planted this year, said municipal agriculturist Felicitas Ticbaen.

Ticbaen said Typhoons “Ompong” and “Rosita,” which struck Benguet province last year destroyed 80 percent of the seedlings and runners at the strawberry farm in Barangay Betag.

The damage on the strawberry plantation forced farmers to plant cash crops, such as lettuce, to recover from the loss, she said. “Even those who used elevated farm technology were swamped by … floodwater.”

Dubbed the “Strawberry Capital of the Philippines,” La Trinidad produces an average of 1,175 metric tons of strawberries annually which are sold as raw fruits or processed products.

According to Ticbaen, the local government recently opened a bidding for a P1-million contract to import seedlings of the Sweet Charlie, the preferred variety of farmers and processors due to its sweetness.

Part of the imported seedlings will be propagated by the town government to replenish the destroyed nursery stocks, while most will be sold to farmers at the original cost but cheaper than commercial products, she said.

“We will need to prepare for possible situations like last year so our farmers will have a fallback,” she said.

Mayor Romeo Salda said the imported seedlings were guaranteed free from diseases, such as Fusarium wilt, which is a bane to the strawberry industry.

Salda, who arrived from Japan this week, said a sister town had offered to help farmers in strawberry production. He said the seedlings would be propagated in time for the town’s Strawberry Festival in March.

Visitors can still pick strawberries at plantations here, known as the Strawberry Farm, and the agritourism business incubation area, which is managed by the Benguet State University, he said. Farm-gate prices range from P350 to P450 per kilogram. —KARLSTON LAPNITEN