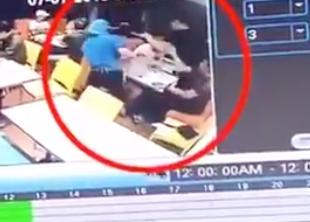 The incident was caught in a security camera footage which shows De Los Santos hitting the waiter Christian Kent Alejo in the face while placing mats on their table on July 7.

In a statement released Thursday, the BMP said that “the unfortunate incident is an illustration of how the politician, in this case, Representative De los Santos, views and treats lowly workers.”

They also said that they “can no longer watch idly as they (politicians) flaunt their social rank on ordinary people, even accuse the waiter of staring at the lawmaker when he was merely performing his duties.”

The group also urged the waiter Alejo to “file the necessary charges and to stand firm despite the far-reaching influence of the newbie lawmaker.”

They also said that BMP is more than willing to provide him with a legal counsel.

The group also said that they “will demand that the full weight of law be applied and by the soon to be formed Ethics Committee of the House of Representatives.”

“In light of this incident, it’s about time that we raise the bar of moral fortitude for all elected and appointed state officials. These abuses will not stop unless we hold them accountable and drastically impose more severe penalties,” Leody De Guzman, BMP chairperson, said.

“They are mindlessly drowning in power and influence that they are completely detached from ordinary people, from the very people they owe for their status in society,” the group added.

Delos Santos has issued a statement of apology on Thursday for his actions. In his statement, he said he is sorry and that he should have not lost control of his emotions.

“I am sorry not only to Mr. Christian Kent Alejo and his family but also to the people who voted for Ang Probinsyano. Sorry for disappointing you,” he said.

ADVERTISEMENT
Read Next
Pangilinan hopes UN resolution will convince gov’t to ‘rethink’ drug war policy
EDITORS' PICK
World-standard accounting: Unlocking your financial potential
Water remains our saving grace right now
Defend Your Health! Shop health essentials from home with Rose Pharmacy’s Online Sale
COVID-19 wards in 2 more hospitals reach full capacity
Navotas will be on lockdown from July 16 to 29 – Tiangco
Chatting with companions, answering calls on MRT 3 trains banned
MOST READ
‘I am not my father,’ says daughter of lawmaker who voted to deny ABS-CBN franchise
In slap on face of PH, China replies to Locsin on tribunal ruling: It’s invalid
Vilma Santos-Recto ‘prepared’ to face ‘consequences’ over ABS-CBN franchise vote
Did a meme get on Agot Isidro’s nerves? She’s asking ’24 Oras’ to fact-check it
Don't miss out on the latest news and information.